When the Coast Guard unveiled a proposal to add 43 barge anchorage spots distributed among 10 locations on the Hudson River between Yonkers and Kingston, it asked for public comment through an online portal.

The public responded. When the comment period closed Dec. 6, the Coast Guard had received more than 10,000 responses opposing the project.

The Coast Guard told The Current over the summer that the comment period would be followed by a series of public hearings in river towns up and down the Hudson sometime in 2017. But a few groups of sometimes unlikely allies have banded together to stop the proposal before it gets to that point. Over the past week, two coalitions released reports challenging the legality of the project.

When the plan was first made public, it drew immediate condemnation from environmental groups. Their reasons for opposing the project were numerous: That the anchors would scour the river bottom, destroying marine habitats. That the blinding lights and deafening noise of barges parked overnight would be a nuisance to river towns. And that the Tug & Barge Committee of the Port Authority of New York and New Jersey, which had brought the request to the Coast Guard, conceded the industry stood to profit after the lifting of a federal ban on American crude oil exports. 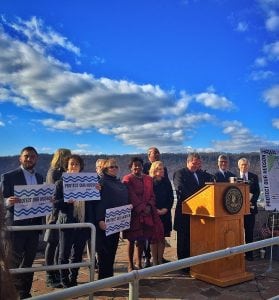 Yonkers Mayor Mike Spano speaks at the Yonkers waterfront alongside the Hudson River Waterfront Alliance in a press conference held Dec. 1. (Photo by B. Cronin)

That statement led to the fear that the river would turn into what Paul Gallay, president of the environmental organization Riverkeeper, called “a mobile pipeline,” with crude oil continually being shipped upriver. Currently, he said, the stretch of the Hudson between Yonkers and Kingston only has one anchorage ground, near Red Hook, which is seldom used.

The industry has argued that it needs anchorage grounds as a matter of safety, as they allow barge captains to drop anchor to rest crews and deal with inclement weather. But the Hudson River Waterfront Alliance, an coalition of lawmakers, mayors, business owners and environmental groups that held a news conference Dec. 1 at the Yonkers waterfront, disputes that.

“Our communities need safety,” Gallay said. “The tanker operators? They have safety. The Coast Guard already authorizes emergency berthing when there’s bad weather, for all the barges that have transited the river for decades. This isn’t about safety. It’s about staging barges to collect oil in Albany. It’s about storing oil on the Hudson. If it’s about safety, why are 42 of these 43 anchorages for long-term storage?”

Mayor Mike Spano of Yonkers argued that the phrase long-term has no legal definition, leading to fears that barges could remain parked on the Hudson for weeks. “The barge industry has not provided sufficient justification for the additional barges, plain and simple,” he said. “They haven’t even told us how long they would be there. We don’t know what a short stay or a long stay is.”

A map of the five barge anchorage spots proposed between Beacon and Newburgh.

The Yonkers waterfront is undergoing a revitalization that was decades in the making and has already cost hundreds of millions of dollars — a project lawmakers said would be in jeopardy if the anchorage proposal goes through.

“You see these beautiful buildings here?” asked state Assemblyman Gary Pretlow. “The reason why they’re here is because people want to be near the river — a river that doesn’t smell, a river that is beautiful. We don’t want to look at the river and see 40 of those parked outside,” he said, gesturing to a barge that was, as if on cue, slowly making its way upriver.

The Alliance has sent the Coast Guard a memorandum prepared by Mark Chertok of Sive, Paget & Riesel that challenges the legality of the project.

“This may well be a proposal to let barge owners and other tanker owners use the river to park vessels in order to allow demand to increase at the refineries and thereby get higher prices for the cargo,” Chertok explained. “We call this a form of ‘rivering arbitrage,’ which basically allows free use of a public resource of incredible value for private profit. We don’t believe that’s within the confines of the statute that allows the Coast Guard to act.”

The Alliance also charged that the Tug & Barge Committee should be required to prepare an Environmental Impact Statement. A few days later and a few miles upriver, another group of lawmakers and environmentalists argued that the Coast Guard should be responsible for an environmental review, and it should have been completed before the agency solicited public comment.

On Dec. 5, a group of students from the Pace University Environmental Policy Clinic, with support from lawmakers such as State Senator Sue Serino (who represents Philipstown and Beacon) and Westchester County Executive Rob Astorino, unveiled their own memorandum charging that the Coast Guard did not follow its own procedures before making the proposal public. In addition to the lack of safety assessments, the students argued that Coast Guard guidelines required the agency to seek public input and expert counsel before publishing the proposal.

“I suspect the Coast Guard knew the proposal would not survive the level of public scrutiny its own procedures require,” said John Cronin, a faculty member at the Pace clinic. “The Coast Guard essentially ran a covert regulatory process in plain sight.”

Even if the proposal continues to the next stage, it will almost certainly face stiff and mounting opposition. “When you have environmental groups and the folks who are investing money in our local economies and waterfront economies agreeing, you need to pay attention,” said Ossining Mayor Victoria Gearity, a member of the Hudson River Waterfront Alliance.