A cherished tradition dating to the 1940s is enjoying a revival in Garrison.

Guy Cockburn sold his first Christmas tree in Garrison in 1946. Over the years, his farm on Route 9 just north of Route 403 became so popular he had to start a waiting list. In 1981 The New York Times reported Cockburn had to turn away as many as 2,000 would-be customers from his “choose-and-cut” operation. Some people even had trees shipped to Florida. 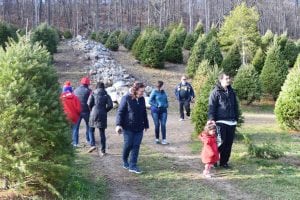 Cockburn, who served as president of what is now known as the Christmas Tree Farmers Association of New York, was dubbed “the Babe Ruth of Christmas Tree Contest Ribbon Winners” and “the Godfather of Christmas Trees.” During the Ford and Carter presidencies, Cockburn Farm trees adorned the White House.

Cockburn stopped growing trees in the mid-1990s and died in 2003 at age 88. His four-acre farm had been idle for about two decades when Sean Barton and Josh Maddocks, both from Garrison, purchased it in 2015 and once again began growing and selling choose-and-cut trees.

“We wanted to bring a family tradition back to the Hudson Valley,” Barton says. Cutting your own tree “is mainly about the experience. And it’s a very local experience.” 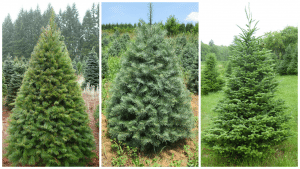 How well do you know your Christmas trees? Identify the Douglas, Fraser and white firs. (Answers below.)

They also bring in trees from western Pennsylvania, Barton says, although a freshly cut tree “absolutely lasts longer” than an imported one. The varieties include Douglas, Fraser and white (concolor) firs. Cut trees are replaced each spring; at full capacity the farm could yield about 4,000 trees, he says.

The search for the perfect tree at Cockburn Farm was an experience that Nia Gourgareas and Joe Ruggiero are unlikely to forget. When the Cortlandt Manor couple arrived Dec. 4 and began searching the grounds, Gourgareas came upon a tree that stood out — large letters attached to the tree spelled out an important question: “Nia — will you marry me?” 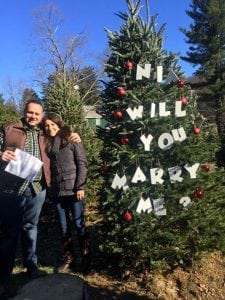 While every visit may not be quite that memorable, Barton says he and Maddocks strive to make it a pleasant holiday treat. Customers are treated to free hot chocolate and cookies and each family who purchases a tree receives a “Cockburn Farm 2016” ornament. Santa Claus will stop by each Saturday and Sunday from noon until 4 p.m. through Dec. 24, and a variety of wreaths and decorations are available in the gift shop.