Highlands singers form ensemble (and they have costumes)

A new vocal quintet, the Brasiles Ensemble (pronounced brah-zee-lez), will debut at Boscobel’s Sparkle! celebration on Friday, Dec. 16 and Saturday, Dec. 17, with its members — Laura Danilov, Madeleine DeNitto, Kimberly Hiss, Paul Philips and Ed Robinson — attired in Dickensian costumes constructed by Kassie Chapman from items purchased at the Graymoor thrift shop. The group will be singing carols and other winter-themed works and has already booked performances into 2017, including Nov. 25 at the Chapel Restoration.

Founder DeNitto says the idea for the ensemble came to her a few years ago following an All Souls’ Day concert called “Nocturnal” by the choir at St. Philip’s Church in Garrison. The concert featured soloists accompanied by piano but led a few of the singers to discuss forming an a capella group, she recalls. 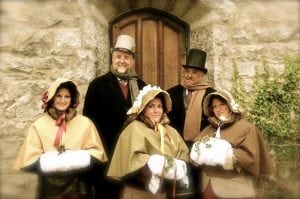 DeNitto says the group does plan to invite other singers. “We want to grow but always within the boundaries of having an ensemble that not only has strong voices but is filled with people who are great to work with,” she says. “We are limited to those who have the time to do this, which is a big factor. I couldn’t have asked for four better people to get this started.”

The group members — only Danilov is not a member of the St. Philip’s choir — get together for two hours each Tuesday morning to practice, learn the music and perfect the harmonies. Their repertoire has included madrigals, folk songs, sacred material, carols and opera. DeNitto says they are always scouting for rare pieces while also practicing familiar works and carols.

Danilov (alto), a life coach from Cold Spring, has sung everything from musical theater to rock and also taught Williamson Technique movement at the Actors’ Movement Studio in New York. DeNitto (soprano), a professional organizer, spent a decade performing with an opera company in Atlanta. Proficient in sacred and early music, she was a member of a madrigal group for several years. Soprano Kimberly Hiss, a magazine writer and editor (and contributor to The Current), who lives in Peekskill, studied vocal performance at Penn State and has sung with the Young People’s Chorus of New York City and the Russian Chamber Chorus of New York.

Paul Philips (tenor), a Highland resident who works in educational publishing, was an original member of the Oberlin Obertones and has performed with the New York Chamber Symphony Chorus, the Judith Clurman Chorale, the Juilliard Choral Union and the Oxford University Press Choir. Finally, Ed Robinson (bass) of Yorktown, a retired mechanical engineer, has sung with the Manhattan Borough-Wide Chorus and the Saint Augustine Chapel Choir with Trinity Parish.

DeNitto says the name of the group originates with her family history. On July 4, 1921, her grandparents Salvatore and Madeleine DeNitto arrived in New York harbor from Italy. Madeleine’s three children would later recall their mother singing opera in her kitchen while baking French loaves. “Madeleine left behind her native country, her beloved family and her maiden name, Brasiles,” DeNitto says. “It is in her honor that I lend her given name to a group of fine musicians whom she would certainly have adored.”

For more information, visit facebook.com/thebrasilesensemble. To contact the group, which is available for hire, call 917-536-2033 or email [email protected]

The ensemble performs “The Boar’s Head Carol,” from the 15th century.