At its Dec. 1 meeting the Philipstown Town Board raised most building-permit fees, although they remain comparable to nearby municipalities.

The board didn’t increase fees outright  but instead changed the formula used to calculate them. Under the previous schedule, a permit cost 40 cents per square foot. Under the revision, which was adopted unanimously by the five-member board, the charge is now $10 per $1,000 of value.

Three nearby towns charge more: The fee per $1,000 of value is $12 in Fishkill and Carmel and $20 in Putnam Valley. Under pending changes in Kent, the rate would increase to $10. Only Southeast charges less, at $9.12.

Permits for renovations and additions will continue to be calculated on a dimensional basis, at 60 cents per square foot.

Supervisor Richard Shea said the fees needed to be increased because they were not covering the town’s expenses in the permitting process.

The changes were proposed by Greg Wunner, the newly appointed building inspector and code enforcement officer, who came to Philipstown from Fishkill.

Wunner’s department soon may see other changes as well. At the meeting, Shea announced that Philipstown and the Village of Cold Spring are pushing ahead on consolidation of their building inspection and code enforcement operations. Shea said he, Wunner and Cold Spring Mayor Dave Merandy were scheduled to meet Dec. 6 to work out the details. “I know the village is anxious to do it,” Shea said. “It’s all positive.” Bringing the Village of Nelsonville into the consolidation remains an option, Shea said.

The two villages and town discussed consolidation in 2014 but Cold Spring backed out. However, in 2015 the town and village agreed to have Kevin Donohue, then the Philipstown inspector, handle oversight of the Butterfield redevelopment project in Cold Spring. This past summer, the Village Board authorized Merandy to sign a letter of intent on merging the town and village departments. Philipstown and Nelsonville also resumed discussions.

The board used a routine get-acquainted visit by Jill Varricchio, president of the Putnam County Economic Development Corporation, to push — again — for the county to share sales-tax revenue. Unlike most counties in New York, Putnam does not return a portion of sales tax revenue to the towns and villages in which it is collected.

“We generate a lot of sales tax revenue for a small community and we’d like to get something back,” Shea said. “We really feel the strain” of supporting “all our roads” and other services used by visitors as Highlands tourism booms, he said. 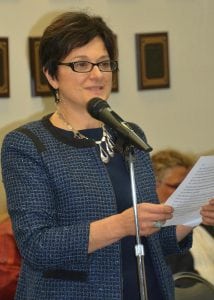 “We’re adding stresses to our resources but we’re not getting anything,” added Councilor Nancy Montgomery, while Councilor Mike Leonard pointed out that officials and residents would be motivated to do more for tourism and business growth if they saw some financial return from the county.

Shea suggested Varricchio host a meeting of all the town supervisors in Putnam to vent their frustrations with the sales-tax situation. “That’s the one thing that brings everybody together,” he said.

“OK — good thought!” Varricchio replied. In her presentation she outlined the basic work of the Putnam EDC, which promotes the creation and retention of businesses and provides information on commercial properties, incentives, resources and demographics to encourage development.

“We market the county’s assets” and try to increase the tax base, Varricchio explained. “We strive for balanced growth.” She presented board members with plaques of appreciation for their public service and distributed tape measures bearing the Putnam EDC logo. (Each came in a box stamped “Made in China.”)

Towns don’t often lose roads, or parts thereof. Nor do they want to lose state money associated with upkeep. To ensure it doesn’t happen to East Mountain Road South, the board passed a resolution reasserting its jurisdiction over its entire 6.1-mile length, from Route 9 to the Fishkill border. The road has 3.4 miles of pavement and 2.7 miles of dirt surface.

The board also agreed to notify the New York State Department of Transportation of the action, thereby ensuring that state highway funds flow smoothly. If the state is thus duly re-apprised of town jurisdiction over the road, it appears that some residents remain ignorant — another reason for the board’s declaration.

“Some of this comes from people being a nuisance and claiming the road,” Shea said. “If you want to claim the road, maybe you can claim the maintenance on it.” He described various encroachments, such as reflector poles and other impediments, installed in the mistaken belief that a homeowner’s property extends halfway across the road. “These are public roadways” which the town must keep open, he said. “Let’s work together on this, doing what makes sense.”

Board members also responded to concerns about the proposed Fjord Trail, which would parallel the river; Route 9D, a busy state highway; and the Metro-North Railroad tracks and link Cold Spring and Beacon. Some residents fear the trail will bring more crowds and exacerbate overuse of the already popular Breakneck Ridge-Bull Hill trails, while burdening municipalities and agencies, including emergency services.

Board members contended that the trail will help disperse visitors, relieve pressure on mountain trails, offer an alternative to those ill-prepared to climb steep hillsides and reduce the number of rescues.

“I do understand the concerns with foot traffic,” said Shea. Nonetheless, he said, “people are coming” now. He described the trail “as nothing but a positive. We can stick our heads in the sand and continue the way we are – we’re on borrowed time until something catastrophic happens” – or turn the situation into something advantageous. “We do need to manage it and this trail will help.” Furthermore, he said, the project includes washrooms, parking lots, visitor information and other necessities now lacking.

“To bad we didn’t start this earlier,” Montgomery commented. In high-tourism areas, “if you don’t have the infrastructure, then your town will get trashed. We’re not going to stop it, so we might as well provide a really nice, aesthetically pleasing infrastructure for it.”