Elizabeth Ailes, owner and publisher of The Putnam County News & Recorder in Cold Spring, announced Dec. 13 that she has sold the 150-year old broadsheet and its 175-year-old sibling, The Putnam County Courier, which covers the eastern part of the county, to Douglas Cunningham, the papers’ editor and associate publisher.

The building that houses The PCNR is also for sale through A.D. Preusser Real Estate of Garrison for $1.15 million. Elizabeth Ailes and her husband Roger, the former chairman of Fox News, purchased the building at 144 Main St., in 2009 for $628,500 and completed extensive renovations.

Cunningham declined to disclose the purchase price of the two weeklies but refuted a rumor (one of many buzzing about Philipstown over the last few days) that Roger and Elizabeth Ailes offered it as a gift. “My accountant and banker can tell you I’m putting cash into it,” he said. 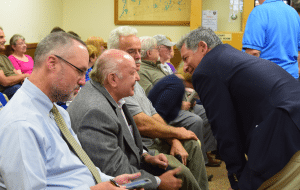 Roger Ailes, second from left, confers with developer Paul Guillaro at a Cold Spring Planning Board meeting in June. Douglas Cunningham is in the foreground. (File photo by Michael Turton)

Roger Ailes, the Republican political consultant and media mogul who was forced out of Fox News last summer after allegations of sexual impropriety, bought the newspaper in 2008 and Elizabeth Ailes became The PCNR’s owner and publisher. The enterprise expanded in 2009 with the purchase of The Courier. The couple has a home in Garrison.

Cunningham said on Dec. 13 that he and Elizabeth Ailes “are finalizing the papers now” for the sale and would complete the transaction by the end of the week. “I’m thrilled,” he said. “It’s a great opportunity.” During his years at The PCNR, he said he has come to greatly enjoy Cold Spring and what it offers for small-town journalism. 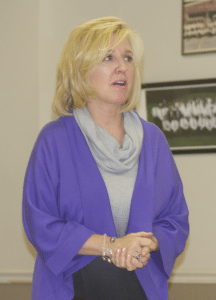 Moreover, he said, The PCNR and Courier are “very sound newspapers,” adding that both have strong readerships and advertising support. Cunningham said that “in general” everything at the papers would proceed as normal under his leadership and that he would retain key staff members.

Cunningham, who resides in Milford, Pennsylvania, about an hour west of Cold Spring, said he and his wife, Sheila, plan to relocate to Garrison. They have three children, two of whom are in college and one in high school.

Cunningham became the editor of The PCNR in 2011. A graduate of the William Allen White School of Journalism at the University of Kansas, he is on the board of the New York Press Association. He spent 20 years at the Times Herald-Record, based in Middletown, as a business editor and columnist before becoming campaign manager for Republican Nan Hayworth in her successful bid in 2010 to represent the 19th District in Congress, which then included Philipstown.

Following Hayworth’s win, Cunningham was hired as public relations director of Focus Media in Goshen, which specializes in crisis management, market research and “representing developers in controversial land-use matters,” according to a press release from the time.