Author will share book for children who feel overwhelmed

In the weeks following Sept. 11, 2001, therapist Mhairi Koepke worked with children who were at the scene of the World Trade Center collapse and witnessed the destruction. One child in particular became so withdrawn she stopped speaking.

“It took quite a while for her to find her voice,” Koepke recalls. “Others were having trouble identifying their feelings because they had so many.”

Koepke searched for books to share with the children that “dealt specifically with the sense of inner chaos and emotional turmoil so many of us were feeling.” She eventually wrote one herself, Thread Girl the Brave, and will introduce it Dec. 17 at a workshop for younger children at the Desmond-Fish Library in Garrison.

The inspiration for Thread Girl comes from Koepke’s childhood. “She was that calm inner being I relied on in times of turmoil like moving from Scotland to Canada at age six, and going to four different schools in four years,” says the author, who has lived in Cold Spring for more than 20 years. Knowing even as a teenager that she wanted someday to work with children, at age 13 she began using imagination to connect with children with autism and physical disabilities.

That’s also when she first envisioned creating healing picture books. She would years later begin her professional life as an artist, illustrator and figurative sculptor. Her fascination with the human form led to medical illustration and then to massage therapy, specializing in treating children. “It was a natural progression,” she says. “I also have a bachelor’s degree in art and children’s literature and all of these experiences added to my understanding.”

Koepke’s approach is to help children identify feelings by noting that “very often we aren’t feeling just one thing, we are feeling multiple things all bundled on top of each other,” she says. “The idea is to give them skills to reduce their sensory input. Then help kids to identify and tease out feelings and just be with them all, to help them find compassion for themselves in the situation they were in and then to be able to articulate their experience. Together we look for the little inner person who is hidden deep inside.” 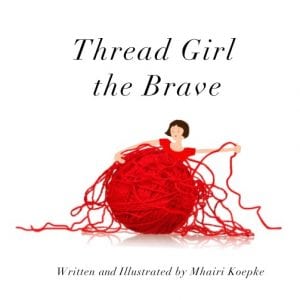 Thread Girl, mirroring Koepke’s practice, is “a story about a girl who is made up of thread and yarn in a distant galaxy,” she explains. “She is so excited and full of energy that she sets out for Earth, bursting with enthusiasm, and begins to explore. As she does she begins to unravel and all the feelings that were held inside her spill out until she finds herself having an incredibly colorful meltdown. She then picks up her pieces and has to figure out how to put herself back together again.”

After Sept. 11, Koepke discovered books for younger readers that explained basic emotions but none that spoke about being overwhelmed. “I wrote and illustrated this book to explain the nuts and bolts of a tantrum in a nonjudgmental way and to show how chaotic energy can be transformed into creativity,” she says. “In the past, when we were growing up, there were two acknowledged emotions: happy and sad. There wasn’t a lot of time spent on understanding nuances or even considering that young people struggled with the complexity or conflicting feelings the way adults do.”

She adds: “We’ve come a long way in seeing children as the highly developed people they are instead of assuming they have little feelings because they are small. This book is for children who find it hard to focus, have difficulty expressing emotions, are sensitive, overstimulated or hyperactive. It deals with common stumbling blocks like anxiety, impatience, mood swings and messy rooms.”

Koepke also treats adults, many of whom find her through her site at flowerwaterheaven.com. “Most adults experience times when they feel overwhelmed or out of control,” she says. “Learning how to manage emotions is part of the human experience.” Parents see her, too. “My goal is to educate the whole family so that they can continue to care for each other.”

The free Dec. 17 workshop, which starts at 2:30 p.m., is targeted to 5- to 7-year-olds but any child is welcome to attend. Thread Girl the Brave is available in hardcover and ebook editions at blurb.com and in paperback and for the Kindle at Amazon.com.