Nat Prentice, lone voice against budget, gets most votes

In the first election for the newly created Garrison Fire District, voters Dec. 13 voted out two of the five appointed commissioners and gave Nat Prentice, the only commissioner to vote against the district’s initial budget, a convincing victory and a five-year term.

Prentice received 208 votes, the most of any candidate. He was the sole dissenting vote when the commission passed a $777,097 budget for the fire company, a 27 percent increase over the last budget passed by the town board when it had oversight.

Challenger Stan Freilich received 182 votes and will serve a four-year term. David Brower, an incumbent and fire company member, received 161 votes and will serve a one-year term. Newcomer Linda Lomonaco and incumbent chairwoman Sandra Bohl, also a fire company member, tied with 165 votes. The two will draw lots later this week to determine who serves a three-year term and who serves two years. 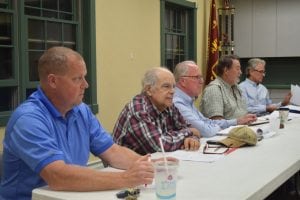 Voters were asked to select five of nine candidates. Challenger Joe Regele, a longtime critic of the fire company’s finances, received 155 votes, six votes shy of tying or defeating Brower for the fifth seat and replacing three of the five current commissioners. Commissioners Rodney Tudor (153 votes) and Mercurio (121) were not elected, nor was challenger Joseph Fronio (148). The fire company had endorsed four of the five current commissioners, excluding Prentice, along with Fronio.

Although only 20 percent of registered district voters showed up, the turnout at the Garrison Volunteer Firehouse during the three hours of polling nevertheless surprised election officials, who had to print 150 more ballots after the first 200 were used. Officials also shared print-outs of the candidates’ responses to questions posted at highlandscurrent.com. Voting closed at 9 p.m., and it took election officials until 1:15 a.m. to conduct a hand tally of the 338 ballots, from among 1,760 potential voters. One ballot was discarded for an overvote.

Because it is the first year of the fire district, state law allows commissioners to set spending without voter approval.

The new commission will be seated Jan. 1. On Dec. 12, 2017, district voters will decide on Brower’s seat. [Correction: The commissioners vote on the budget; it is not put to a public vote.]

Anne Osborn, one of the three election officials, thanked her co-workers and fire company members who stayed well into the morning to get the vote completed. “Counting everything by hand makes the electronic ballot machines look very efficient,” she wrote in an email. “It was a great turn-out even if it took forever for three of us to check everyone in and count all their ballots. I would recommend more time for the voters, more staff for the canvass and carefully bound poll books.”

The Philipstown North Highlands Fire District also held a vote Dec. 13 for two of its five commissioners, Johanna Rupp for a five-year term and Amy Locitzer for a one-year term. Both ran unopposed. Thirteen voters turned out, of 1,938 registered, a turnout of 0.7 percent. Rupp received 10 votes and Locitzer 11. There were also write-in votes for Joe Regele, Stan Freilich and Mickey Mouse, none of whom live in the district.