By Michael Turton and Jeff Simms

It’s an annual small-town conundrum: the tactile experience and personal service of Main Street or the cut-rate pricing and delivery of the internet?

While some Highlands retailers who sell manufactured goods admit they feel the pinch competing with Amazon and other digital behemoths, those who offer locally made products are steadfast in the belief they can survive in an age of aggressive bargain hunters.

“We have a niche,” said John Gilvey, a co-owner of Hudson Beach Glass on Main Street in Beacon. “Maybe you don’t buy anything the first or second time, but down the road we’ll come to mind. When they’re giving a gift, they like to give something that was made here. Maybe they even saw it being made.” 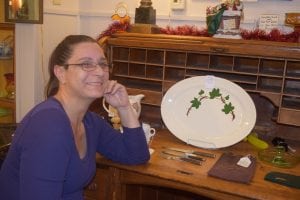 During visits to shops up and down Main Street in Cold Spring and Beacon, a number of retailers said they rely on relationships they establish with customers.

“The further we move into the tech revolution, there’s something that will always attract people to the human experience,” offered Sean Congdon, owner of the Audioccult record store in Beacon. “It’s never going to get old.”

Even in an industry heavily influenced by eBay and other sites that sell LPs, Congdon says he sees a sense of ownership among small-town shoppers. “I’ve had more than one person during this holiday season buy a record from me rather than online, even if it’s a few bucks cheaper, because they want to support local businesses,” he said.

Tim Chevtaikin, the owner of Archipelago at Home, has been selling gifts and home furnishings on Main Street in Cold Spring for 19 years. “I see my faithful customers all year, but especially at this time of year,” he says. “They know they can’t find the things they buy here at a mall.” 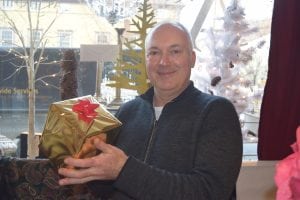 He conceded that he and other retailers must compete with Amazon, but noted that customers face the risk that an item won’t fit properly or looks different from the photos. “A lot of people end up wasting time, returning items,” he argued. In contrast, he estimated that less than 1 percent of his sales are returned. “That says a lot about what I offer.”

He also provides free gift wrapping. “People like that they can buy things here, leave them, and come back later in the day to pick them up, wrapped and ready to go,” Chevtaikin said. He uses the internet to his own advantage by posting photos of his products on Facebook and mailing orders. “You have to ship,” he said.

By contrast, Caryn Cannova of Kismet in Cold Spring said Amazon represents “a huge problem” for her, especially its Prime service, which includes free two-day shipping. “There’s nothing I can do about it,” she said, although she has posted a “No Photos” sign that reflects the ongoing battle with customers who snap pictures of items they like on their phones so they can more easily find them online. “They even took photos of my greeting cards,” Cannova said. 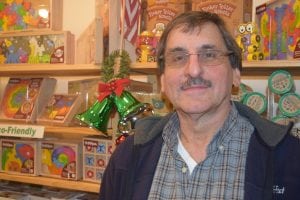 Jim Farnorotto of The Gift Hut (Photo by M. Turton)

Despite the challenges, the holiday season continues to be the most important time of year for brick-and-mortar businesses. The day after Thanksgiving is usually associated with early morning lineups at big-box stores, but Cannova said she too reaps rewards. “We had an amazingly insane Black Friday” this year, she said.

Jim Farnorotto, the owner of The Gift Hut, said he records 40 percent of his total annual sales during the holidays. He tries to stock items that aren’t easily found elsewhere. Nevertheless, for some reason sales this year has been slow, perhaps because Hanukkah does not begin until Dec. 24. “Last year we were knee-deep in customers,” he said.

Jeanine Hill, who along with her father Walt Carmichael operates Fountain Square Antiques, has also noticed a slowdown. “November through February are usually strong, but not so far this year,” she said.

Like many shops, Fountain Square relies on customer service to generate repeat business. But quality also helps. Seated at an antique roll-top desk, Hill commented: “They don’t make furniture like this any more: pieces more than 100 years old and still useable. You can’t buy antiques in a big-box store,” and many of the products they do sell end up in landfills, she said. 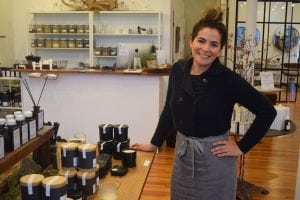 Retailers such as Burkelman and Cold Spring Apothecary in Cold Spring that began online before opening a storefront seem to have struck a balance. Mail order at Cold Spring Apothecary, which was founded in 2010, accounts for 40 percent of holiday sales, said manager Natalie Amendola. “I don’t feel we’re affected by Amazon,” she said, in large part because the health-and-beauty retailer makes it own products.

At Mountain Tops Outfitters on Main Street in Beacon, as two customers took their purchases to the register, one asked how a particular garment fit after washing while the other inquired if her purchase could be returned if it wasn’t quite right. Moments later, co-owner Katy Behney said the friendly, personal interaction summed up the benefits of shopping offline.

“Our customers can touch the item; we can talk to them about it,” she said. “We’re not getting rich, but the locals have been really good to us.”

One thought on “The Internet vs. Main Street”