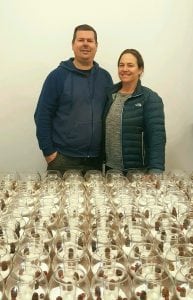 Davey Lant and Lilach Shani with some of their holiday candles (Photo by M. Turton)

A Philipstown couple is doing all they can to make the season  brighter — literally. By the time the new year arrives, their company will have produced and sold more than 15,000 holiday candles.

Shalant Candles takes its name from the husband-and-wife team of Davey Lant and Lilach Shani. In 2002 the Garrison residents began selling candles made in California at New York City’s holiday markets. When the candlemaker retired in 2013, they decided to do it themselves.

Shani flew to meet with their former partner for a “one-day lesson in candlemaking,” Lant recalls. After some trial and error, Lant and Shani  found the “magic numbers” for fragrance, pouring temperature and other aspects of production, he said.

Shalant produces mineral oil candles in six sizes and 10 designs that incorporate apples, pinecones, cranberries and “snow” made from sugar. Other designs include ocean shells, faux butterflies and oranges.

Lant said the products are unique because they can be reused by placing a tea light in the center. “Only the center of the candle burns,” he explained. “The design remains intact.” The candles retail for $12 to $40 and last for up to 60 hours. 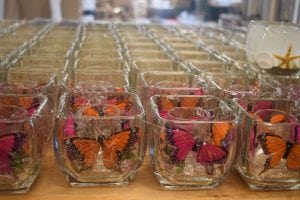 Sales so far have been limited to New York City’s three prime holiday markets at Bryant Park, Columbus Circle and Union Square. It is not an inexpensive venture. A half-booth space costs $7,000 from late October through the first week of January, while a full-size kiosk can run up to $40,000 depending on location. Lant repurposed lumber from his Garrison barn to build three booths, one for each market. 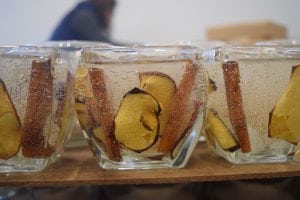 One design features apples grown at a local farm. (Photo by M. Turton)

The customers vary at each location, Lant said. At Bryant Park, they typically come from nearby offices, while Columbus Circle is dominated by tourists. Union Square, he said, “is where you find the real New Yorkers.” The couple hopes by the spring to accept wholesale orders through its website at shalantcandles.com. 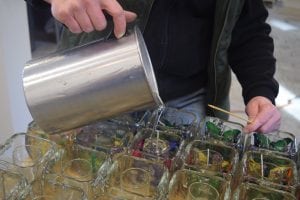 Initially they made candles at their home but now use a building just off Route 9 north of Cold Spring. Their three employees, who include manager Lisa Light, a lifelong Philipstown resident, work full time from September through the holidays. As demand grows, Lant hopes to make the operation year-round in 2017; every candle they’re making before the end of the year is already spoken for.