Glass treasures designed or inspired by Christopher Radko, new to Garrison, may well be hanging from your tree

It could be an uplifting holiday television movie, complete with an unfortunate event, a twist of fate, redemption, success and, ultimately, reflection. Only this plotline did happen to Christopher Radko, a recent transplant to Garrison whom The New York Times once called the “Czar of Christmas Present.”

Radko’s name is synonymous with the hugely popular line of ornaments and accessories he designed and sold beginning in 1986. Although he sold the company 11 years ago, the brand, which still bears his name, is going strong. The earliest Radko-designed ornaments have become collectors’ items, with some scarce sets selling for hundreds of dollars on eBay — a search there for “Christopher Radko ornaments” yields nearly 13,000 results. 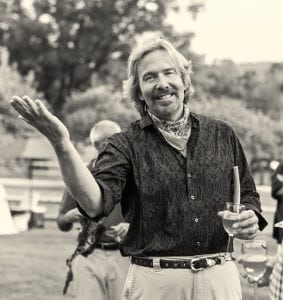 The story of his early success began when a 14-foot-high tree crashed to the floor in his family home in Scarsdale.

“We had a cathedral ceiling and each year I would vie with the local police and fire departments for who would get the highest tree,” recalls Radko, who was then in his early 20s. “I’d drag it in on the roof of my car, pull it in somehow and place it in the cast-iron tree stand. One year I hadn’t got around to cleaning out the sap from the previous year so I decided to buy a spanking new one, two weeks before Christmas.

“I put the tree in it and decorated it; it looked great, with all of my grandmother’s heirloom ornaments. The next day there was a giant crash; one of the legs cracked in the stand, and everyone’s favorite ornaments were completely shattered.

“My grandmother blurted out: ‘Christopher, what happened? You’ve ruined Christmas!’ The tree was like a family diary, and I didn’t know what to do. I scurried about, looking for ornaments, but everything was plastic or resin or Styrofoam.” 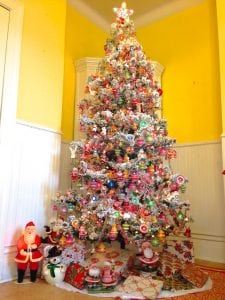 Christopher Radko decorates his own tree with antiques. (Photo provided)

The following spring, Radko was visiting a cousin in Poland and mentioned his Christmas saga. She noted that many Poles still hung glass ornaments. As they talked, they walked by a pharmacy that had, in its window, “beautifully blown testers and beakers for making moonshine vodka from potatoes,” Radko recalls. The proprietor said he made them once a year to sell at a market.

“Can you make me some now?” Radko asked, and the man asked him to draw some designs. “He looked at my designs, told me they were very old-fashioned, but he made them — there were about 24 — and they had beautiful hand-painted details of snowflakes and comets on them.”

Returning to New York, Radko brought them into his office, which at that time was at the ICM talent agency. He was in the early stages of agent training, which began in the mailroom. When he showed them around and found everyone asking for their own, Radko had an inkling he was on to something. 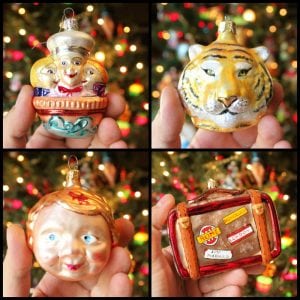 He sold that first batch to his co-workers. “I made up prices!” he recalls. “I sent a cable to my cousin asking her to get more and suggested three sizes and colors. Two weeks later I got a huge carton. I created a little catalogue, using rub-on letters and lots of White-Out. During lunch hours I’d go to Royal Copenhagen, Bendels, high-end florists and better gift stores near 57th Street, where ICM was located. They all wanted them. And they’d report to me that celebrities were buying them: Katharine Hepburn, Woody Allen, Baryshnikov, Whoopi Goldberg and Bruce Springsteen.

“We’re such a celebrity-driven country that getting endorsements was important, and it led to hiring a publicist, who got the ornaments on The Today Show and Oprah. It grew from there. It was fun and boosted my own sense of self-confidence. I felt my ornaments had a purpose; they were objects which created connection for people.” 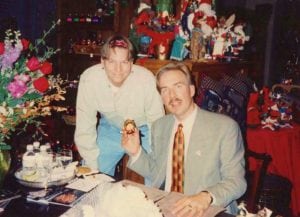 His inventory expanded after Barbra Streisand requested Hanukkah ornaments and people asked for them for weddings and even the Fourth of July. Radko was hired to design mantel displays for the White House and to decorate the vice president’s residence. Not yet 30, he found himself constantly on the road attending trade shows, signings and charity events, writing collector guides, and visiting manufacturers in Europe, while still drawing all the designs.

Radko says it never crossed his mind growing up that he’d be a designer or entrepreneur. Both of his parents were doctors. He studied English at Columbia and graduated “truly not knowing what I was going to do with my life.” He worked multiple jobs. “I was in need of money, but I do believe that there’s more to life than what you see in front of you,” he says. “You write the script for your day.” It was then that the toppling of the ornament- and history laden tree changed his life. 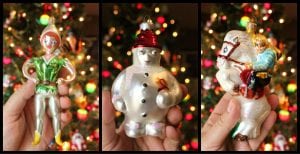 Today, despite his financial success at a young age, Radko is pensive about it all. “I love creature comforts, but if you succeed early — I had the Central Park West apartment, so many things — you begin to think, What do I do next?” he says. “One can spend the rest of life doing positive things, each in our own way, whether it’s helping with homework, or doing charitable work.” Raising money for charity was always threaded through Radko’s work, with designs created for causes such as breast cancer and AIDS research and the Red Cross Disaster Relief Fund.

“People don’t remember you for how much money you made,” he says. “If you’ve done something to encourage people to help lift people up, that’s what matters. I try to put heart into my work and my relationships — that makes me happy.” 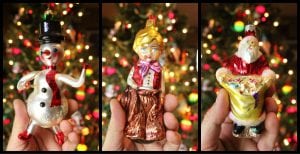 After discovering Garrison and falling in love with its beauty and history (he is organizing a 50th-anniversary tribute to Hello Dolly, which was partially shot in Philipstown, for 2018), Radko searched for the right place to live, and found it, moving in a few weeks ago. He takes breaks from unpacking by leading his two Border Collies for long walks in the woods.

Two weeks before Christmas, he had not yet put up his tree; he confided that when he does, there will not be any Christopher Radko ornaments on it. There never have been, he says, as they symbolize work to him. Instead, he covers his tree with antiques, as his grandmother did.

Asked why his glass ornaments became popular so quickly and have remained so over the years, he says: “The ornaments have always been a tangible container of people’s heart-based memories and emotions. The tree is a blank palette; there are stories behind each ornament; the tree is to be gathered around.”

5 thoughts on “The Ornament King”