“The village’s continual demand to involve engineers, attorneys and other professionals in what had previously been handled in the village administratively by the building inspector and other village officials has delayed progress by over a year and caused an explosion of inappropriate expenses,” reads the complaint, which was filed Dec. 5.

The claim also asserts that Merandy “unlawfully assumed jurisdiction and interfered with the details of all aspects of the project … for the purpose of stopping, destroying, interfering with and/or harming the project without justification and for personal reasons.” 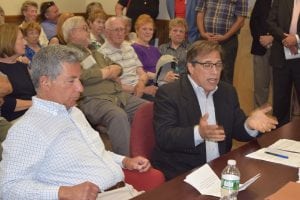 Paul Guillaro and attorney Steven Barshov are shown at a Cold Spring  Planning Board meeting in June when a compromise was reached about relocating the senior center to the Lahey Pavilion. (File photo by M. Turton)

New York State requires that notice be made before suing a local government. Guillaro is redeveloping the former Butterfield Hospital site on Route 9D into a multiuse parcel that includes homes, apartments, retail buildings, a post office and a county senior center.

This is the latest twist in what has been a long list of conflicts during the planning process. The path to the notice began in February when Guillaro proposed moving the senior center from its site-plan approved location on the second floor of the proposed Building No. 2 to the existing Lahey Pavilion. The medical offices in Lahey would then move to Building No. 2.

Before that change, Lahey had not been included in the redevelopment plans. Guillaro and his legal team argued that the switch was minor and did not warrant review by the Cold Spring Planning Board. The Planning Board, headed by Matt Francisco, disagreed, citing changes in traffic flow and parking requirements. The new plan also placed the long-awaited U.S. Post Office inside Lahey.

The disagreement, which was often heated, was seemingly resolved on June 28 when the Planning Board agreed to a 20 percent reduction in the number of parking spaces required and the developer agreed to add four spaces not included in the original site plan. Signage and other improvements related to traffic flow were also hammered out. 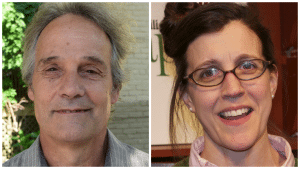 Two weeks earlier, Guillaro and his attorney had threatened legal action if a compromise could not be reached. Ironically, when the June 28 deal was approved, Francisco said, “What we’re trying to do here is apply the [village] code and not get sued.”

The notice also claimed the permit for Building No. 3 was unnecessarily delayed by the Village for more than a year, and that the Village has been improperly charging Butterfield Realty since April 2015 for its site reviews when those fees should be considered part of the application fees.

It also alleged that the Village withheld documents, despite Freedom of Information Law requests, that will “demonstrate the full extent of the illegality of the actions taken by the Village” and that it violated the Open Meetings Law by taking actions during executive sessions.

The notice was submitted for Butterfield Realty by Salvatore Ferlazzo of the Albany-based firm Girvin and Ferlazzo, who said he could not comment on its contents. He noted that under state law a municipality has the right to a deposition to explore the claim and to have an opportunity to resolve the issue. Based on that, he said, it would be premature to comment on a possible lawsuit.