She was raised in Springfield, Massachusetts, on the Connecticut River, the daughter of William Henri and Theresa Walsh. During World War II, her father, who was editor of The Springfield Republican, took a job in Washington, D.C., as part of the war effort, working in press censorship. Her family relocated to New York state after the war, and she later became a journalist herself, covering Hoboken and six North Hudson communities for The Jersey Journal in Jersey City. She returned to New York state after her second marriage to Burton Laux, who survives her. 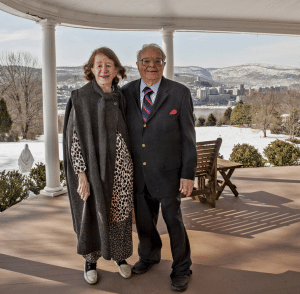 Catherine Portman-Laux and her husband, Burton Laux, in 2014 on the porch of their Garrison home overlooking the Hudson (Photo by Michael Nelson)

She had written prose and poems since she was young, recalling that in high school she once was disciplined when her French teacher intercepted an anti-Roosevelt poem and made her translate its 26 verses into French.

A former church organist, in 2011 she wrote a song with Laux about the Hudson River, which the couple saw every day as it wound past their Victorian home, known as Windfield, on Upper Station Road in Garrison. (“I fell in love with the house and grounds when I first saw them and made a vow to God if he would allow us to own this house, we would use it to make people happy,” Portman-Laux once said.)

She said her song, “The River’s Journey,” which was recorded by friends who called themselves The River Rovers, was written partly in response to “My Dirty Stream,” a song by Pete Seeger. “Now he is deceased, so I shouldn’t be speaking ill of the dead, but with all the beautiful things about that river I wanted to say something nice.” She collaborated with her husband. “He wrote the chorus,” she said. “It’s very, very happy. My part is more haunting.”

Portman-Laux also delved into politics. In 1994 she ran as an independent for a seat in the U.S. Congress representing the 19th District, which included Philipstown. (The Democratic contender was Hamilton Fish Jr., also of Garrison.) Portman-Laux told The New York Times she wanted a federal government limited to “constitutional activities” and that government should “get out of the arts” and let the states handle health care and public education. She also called for tougher law enforcement but not to the extent of “hassling gun owners.” She finished fourth, with 1 percent of the vote.

There will be no wake or funeral, and Portman-Laux will be buried in the Sarasota National Cemetery in Florida, according to Clinton Funeral Home in Cold Spring, which is handling arrangements. Memorial donations may be made to St. Christopher’s Inn at Graymoor.