His mother was executed as a spy. Sixty years later, can he prove her innocence?

Michael Meeropol of Philipstown first visited the White House when he was 10 years old. It wasn’t a sightseeing trip. He was there with his brother to save their parents.

In June 1953 Meeropol and his younger brother, Robert, then 6, marched to the northwest gate accompanied by their grandmother and followed by throngs of protesters. They handed the security guard a letter to President Eisenhower asking him to spare the lives of their parents, Julius and Ethel Rosenberg, who had been sentenced to die in the electric chair at Sing Sing after being convicted of espionage by a jury. The Rosenbergs had been accused of handing over secrets about the atomic bomb to the Russians through a courier named Harry Gold, who passed them to the Soviet vice consul in New York. 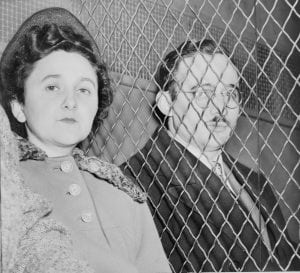 During the trial, the most damning testimony against Ethel Rosenberg came from her brother, David Greenglass, who worked as a machinist at the military base in Los Alamos, New Mexico, and said she had typed up notes he had given Julius about the atomic bomb, making her an active participant in the conspiracy. In exchange for his testimony, Greenglass was given a 10-year prison term and his wife Ruth was freed.

The Rosenbergs’ convictions divided the nation, with protesters proclaiming their innocence and others clamoring for their deaths. Despite pleas for clemency from Pope Pius XII and Albert Einstein, Julius Rosenberg was executed, followed by Ethel, at sundown on June 19, 1953. Left orphans, Michael and Robert Rosenberg took on the name of the family that adopted them.

This month, the brothers returned to the northwest gate of the White House with another letter and a petition with more than 40,000 signatures addressed to President Obama. Based on years of mounting evidence that their mother was not involved in the conspiracy, including the unsealing in 2015 of David Greenglass’ grand jury testimony in which he made no mention of his sister, the brothers are fighting for their mother to be posthumously exonerated. 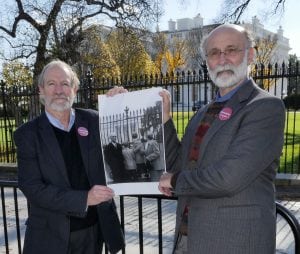 Michael and Robert Meeropol at the White House on Dec. 1, holding a photo taken in 1953 when they traveled to Washington, D.C., as children to ask President Eisenhower to commute their parent’s death sentences (Photo provided)

“The FBI started releasing stuff about the case back in 1975, and that gave us hints,” Meeropol said. But the grand jury material was crucial, he said, because it forms “the official basis of the government’s indictment.”

In 2001, in an interview with 60 Minutes, Greenglass, who died in 2014, said he had manufactured his sister’s involvement after being pressured by the prosecutor, 24-year-old Roy Cohn (who, made famous by the trial, became chief counsel to Sen. Joseph McCarthy). He said Cohn hoped Julius Rosenberg would confess to spare his wife’s life.

“The government didn’t care if she was guilty,” says Michael Meeropol now. “She was just a lever to get to my father. But the bluff didn’t work. That’s the saddest thing about this.”

In 2008, a co-conspirator in the case, Morton Sobell, who served 18 years in prison but maintained his innocence, said he was in fact guilty of spying, as was Julius Rosenberg. Of Ethel, he said: “She knew what he was doing. But what was she guilty of? Of being Julius’ wife.”

A Mother’s Last Letter
A letter written by Ethel Rosenberg to her sons on June 19, 1953, hours before she and her husband were executed at Sing Sing prison in Ossining.

Dearest Sweethearts, my most precious children,

Only this morning it looked like we might be together again after all. Now that this cannot be, I want so much for you to know all that I have come to know. Unfortunately, I may write only a few simple words; the rest your own lives must teach you, even as mine taught me.

At first, of course, you will grieve bitterly for us, but you will not grieve alone. That is our consolation and it must eventually be yours.

Eventually, too, you must come to believe that life is worth the living. Be comforted that even now, with the end of ours slowly approaching, that we know this with a conviction that defeats the executioner!

Your lives must teach you, too, that good cannot really flourish in the midst of evil; that freedom and all the things that go to make up a truly satisfying and worthwhile life, must sometimes be purchased very dearly. Be comforted then that we were serene and understood with the deepest kind of understanding, that civilization had not as yet progressed to the point where life did not have to be lost for the sake of life; and that we were comforted in the sure knowledge that others would carry on after us.

We wish we might have had the tremendous joy and gratification of living our lives out with you. Your Daddy who is with me in these last momentous hours, sends his heart and all the love that is in it for his dearest boys. Always remember that we were innocent and could not wrong our conscience.

We press you close and kiss you with all our strength.

Reprinted with permission of Robert and Michael Meeropol

When the grand jury testimony was unsealed, and after a team from the Seton Hall University School of Law this month concluded the evidence against Ethel was “threadbare,” the Meeropol brothers believed they had the momentum to push for their mother’s exoneration before Obama leaves office on Jan. 20.

Even if the president does pardon her, Michael Meeropol said he understands not everyone will be convinced.

“The usual suspects will come out and say Obama was wrong,” he said. “But hopefully, it would generate interest. Debate generates interest. The people who already study this, the people who read, people who take the trouble, they already know she should not have been executed. But for the president to say it, that will get a whole lot of other people to say, ‘Hey, let’s check this out.’ ” 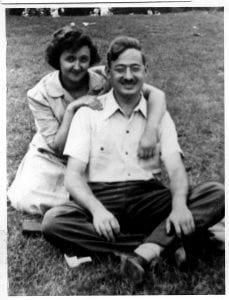 Ethel and Julius Rosenberg around 1942

The brothers see their mother’s death as a cautionary tale about the abuse of power. “These are the kinds of things that governments can do,” Michael Meeropol said, “especially in trying times, when there’s a lot of emotion and a lot of fear.” In the fiery rhetoric of Donald Trump, who was once advised by Roy Cohn, he hears echoes of the Red Scare. “Governments have a habit of being authoritarian when they know they’re right,” Meeropol said. “Nobody is more sure he’s right than the president-elect.”

Both Meeropols have remained active in public life since the 1970s. Robert founded the Rosenberg Fund For Children, which supports the children of political activists. One of his daughters is its executive director, and another daughter is preparing to argue a case before the U.S. Supreme Court on behalf of immigrants who were deported after 9/11. Michael’s daughter Ivy Meeropol, who lives in Cold Spring, in 2004 made a critically acclaimed documentary, Heir to an Execution, about her grandparents.

Michael Meeropol said he learned an important lesson from his mother’s life and death: Never back down when you know you’re right. “If you care about this country, you have a responsibility to be in it,” he said. “There are some pretty trying times ahead, but you have to be in the arena.”