Manager to take over popular business

There’s going to be something different about your first bagel of 2017, although you probably won’t notice it. As of Jan. 1, the Beacon Bagel will be under new, although familiar, ownership.

“It’s time,” said Art Burns, who founded the popular take-out with his wife Anik in the summer of 2009 on the east end of Main Street. “It’s been a long, hard, seven years. The bulk of those seven years has been in the form of 90-hour weeks and 18-hour days. But it’s in a good place right now, and we’re able to do this, so why not?”

Manager Candace Lanza will take over as the owner in the new year. “She’s been running the place on her own for the past nine months anyway,” said Burns, who has been spending less time behind the counter.

When Art and Anik decided to sell the business six months ago, they planned to give Lanza a raise to entice her to stay. “That way, she’d be part of the package,” said Burns. “I’d be able to tell whoever was buying the business that it comes with this amazing manager. But when I brought it up to her, she said ‘Well, what if I wanted to buy it?’ ” 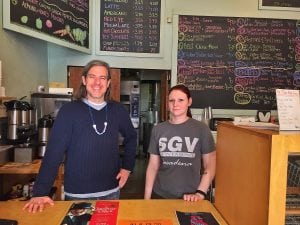 Art Burns and Candace Lanza of The Beacon Bagel (Photo by B. Cronin)

Lanza, who said her only previous culinary experience was a stint in the kitchen at Chuck E. Cheese’s (“although I guess that doesn’t really count”), joined the Beacon Bagel two years ago and quickly acclimated to the shop’s frenetic pace, with its hot line, cold line, coffee line and gluten-free line, plus more than 60 sandwiches on a rotating roster of a dozen bagels, as well as breakfast burritos and salads.

When Art and Anik founded the shop, the East End was a pale imitation of the bustling scene today. The couple had moved from New York City two years prior and were commuting to marketing jobs. Anik quit hers to stay home with their new baby, but then the 2008 crash happened, and the couple found themselves unemployed.

“We asked ourselves what we were going to do next, and then realized that we had been walking around here for two years trying to find a decent bagel,”  Burns recalled.

The couple churned out bagels that hit the platonic ideal of what a New York City bagel should be: Crusty, chewy and substantial. Art Burns grew up around the corner from the original Ess-a-Bagel on 21st Street, which he considered the gold standard until it closed in 2015 due to rising rents. He spent the first winter begging people to come in to the Beacon Bagel but once the word got out among other New York City ex-pats, the lines began to form. By the time the Roundhouse and the Towne Crier opened nearby a few years later, the couple felt the business was over the hump.

Art Burns said his concern now for Beacon is that rising rents will push local businesses out. But bagel fans needn’t worry: The couple signed a 10-year lease last year, which will transfer to Lanza.

The new owner said she doesn’t plan dramatic changes, although she is finalizing an app that will allow customers to order online and join a loyalty program. She’d also like to bring back deliveries.

As for Art and Anik, they’ll be spending the first half of 2017 taking a break and concentrating on their two children. But Art said they’ll also be tinkering with an idea. All he would allow is that it will be food-related and might require a truck. “But it won’t involve bagels,” he said. “I gotta get away from bagels for a little while.”

3 thoughts on “The Beacon Bagel Rolls On”