After 18 years, Momminia to close Jan. 1

After doing business on Cold Spring’s Main Street for 18 years, Momminia Avante Garde Jewelry will close its doors for the last time at 5 p.m. on Sunday, Jan. 1, with everything in stock marked down 50 percent. Steve Goodrich and his wife Marlene, who died in October, opened the shop in March 1998. 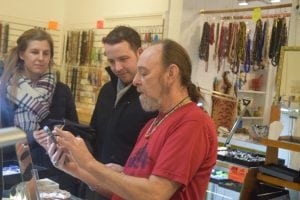 “Her spirit really was this store,” Goodrich said. Longtime employee Monica Singh echoed those feelings. “It’s not the same without Marlene,” she said. “But we’ve had a good, long run.” 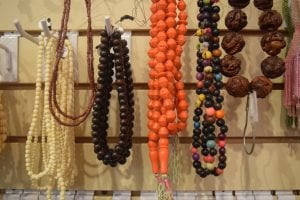 Momminia sold a lot of beads (photo by M. Turton)

Goodrich said he is retiring but will probably sell at a few gem shows “just for fun.” He admitted he found some customers amusing. “People love coming here from the city because they consider it ‘the country,’ ” he said. “Anything that is not all buildings is the country.” For some, he marveled, “their idea of camping is coming here by train and staying at an Airbnb!”