Danny Hairston has a simple message for middle schoolers: When you fall, get back up.

Hairston is the founder and director of the Beacon-based nonprofit SHRED, which stands for Snowboarders & Skaters Helping Reimagine Education. (Shred is slang for snowboarding.) He says he hopes to engage and re-engage at-risk teenagers with the mantra of fear, failure, flow — more familiar, perhaps, as try, fail, persevere — to help those who lack resources to gain a foothold and fly. 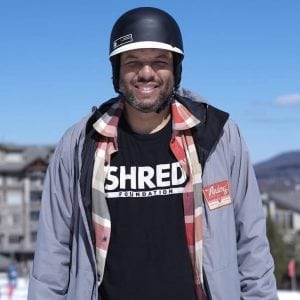 As the snow starts sticking, the Windham Mountain Resort is partnering with SHRED for the second year, offering access, equipment and instruction to teenagers who normally would not have the means to participate.

The program has two components, Hairston says: snow and arts. Founded in 2013, SHRED has its roots in the non-snowboarding capital of Brooklyn, where Hairston worked as a youth program supervisor. A co-worker convinced him to come along as a chaperone on a trip to Vermont sponsored by Burton Snowboards’ Chill Foundation, which builds resiliency in teens through challenging physical activities.

“I had never been exposed to snowboarding,” says Hairston, who was 35 at the time. “I never saw such a quick change in kids.”

He began volunteering for the Chill Foundation and ended up moving to Burlington, Vermont, to do development and marketing for Burton. Eventually he returned to New York City before landing in Beacon and creating and supervising afterschool programs for the Poughkeepsie School District. Earlier this year, a group of 10 students from Poughkeepsie middle schools became test pilots for SHRED. The experiment was a success (nine of the 10 participants now snowboard on intermediate trails) and this year a group has been recruited from the Boys & Girls Club of Newburgh, where Hairston is program director. 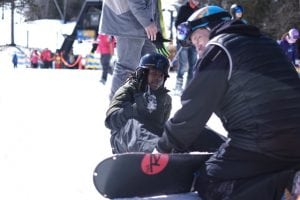 A SHRED participant gets instruction on Windham Mountain. (Photo by Matt Petricone)

SHRED is designed for teenagers who have never been on a snow-packed mountain. “It’s an expensive sport — lift tickets cost $70 to $90 and the equipment isn’t cheap,” he says. Besides Windham, SHRED gets support from Sandbox Helmets, Ski Haus in Wappingers Falls, Orange County Snowboards in Goshen and Out of Bounds in New Jersey, as well as brands such as Burton, Capita, 32 Boots and Union Binding.

The long-term goal, he says, is to partner with schools, recreation departments, snow/skate companies, mountains and brands to develop apprentice programs for teenagers who are interested in pursuing non-traditional careers such as working at a ski resort or for a snowboard company. “We tell the kids that every snowboard company needs an attorney, accountant, human resources staff, as well as retail staff,” he says. “We’re also trying to implement a science and engineering project at Burton involving testing the mechanisms of all their products: what are the components of the snowboard that make it do the things it does?” 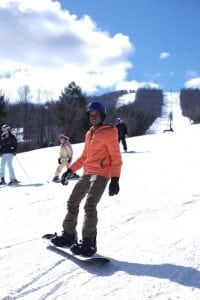 Ready to hit the slopes, a SHRED snowboarder finds his balance. (Photo provided)

SHRED’s arts program includes instruction in videography, photography, graphic design and motion graphics. At the Boys & Girls Club in Newburgh, the goal is for the 12 participants to have a working knowledge of Adobe Works Suite software by the time they enter high school. “We want to use the snow and skateboarding culture to reimagine the education process, with them engaged in learning skills which they can then take back into the classrooms, applying them to math, social studies” and other disciplines, Hairston explains.

Besides fundraisers, SHRED has an event at Two-Way Brewery in Beacon on the second Friday of each month and at Newburgh Brewery on the third Thursday. To donate, visit shredfoundation.org or send a check to SHRED Foundation, 94 Prospect St., Beacon, NY 12508.