Anthony “Zep” Thomaselli didn’t sleep while this article was being written. Instead, monitored the weather, waiting for a Thursday morning snowstorm predicted to bring three to four inches to Beacon.

When a storm hits, the city has 59 miles of roads that must be cleared.

A 23-year Beacon employee and lifelong resident, Thomaselli will retire as the city’s highway superintendent on Jan. 14. Until then, just like every winter, he’ll get little sleep.

Walking through the department’s expansive new headquarters, Thomaselli says he intended to retire a year ago but stayed on to see the 28,000-square foot building open this fall. A substantial upgrade over the department’s Churchill Street facility, the building — located off Matteawan Drive near Beacon High School — has a carpenter’s shop, the city’s street-sign shop and a massive mechanic’s bay. 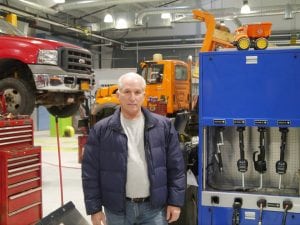 It’s there that Beacon’s trucks are readied for snow and ice, but that’s far from all that Zep — so named as a child, he says, for having “a head like a zeppelin” — oversees. From Main Street decorations to filling in as school crossing guards or collecting bagged leaves from curbside, it’s hard to quantify all that the highway department does, but if it stopped, you’d notice.

Thomaselli, 63, began working at age 14 as a dishwasher and later a short-order cook at the Main Street restaurant now known as Quinn’s. A 1971 graduate of Beacon High, he then worked in construction before buying Zep’s Place (now Dogwood) with Randy Casale, Beacon’s mayor.

“We’ve been friends since I was 10,” said Casale, who was the highway superintendent for 22 years, from 1980 to 2002. “We’re losing a dedicated public servant who always treated our constituents with respect.”

The duo operated Zep’s Place from 1976 to 1980 while Casale worked for the city and Thomaselli was employed as a contractor. In 1993, at Casale’s suggestion, Thomaselli started with the highway department and a decade later became its chief.

“I remember on a Sunday afternoon in the summer, you could roll a bowling ball down Main Street and you wouldn’t hit a car,” he recalled. “Now, it’s amazing. Beacon is cleaned up. It’s fun to see it so vibrant.”

In addition to maintenance of streets and signs, the highway department oversees city parks and the upkeep of City Hall and other public buildings. It also inspects and repairs more than 800 storm basins.

Thomaselli said the blizzard of March 2011 stands out as one of the city’s most difficult in recent memory. “Cars were getting stuck on flat ground,” he said. “We had almost 36 inches, and the snow built up so fast.”

Thomaselli and his crews worked nonstop for days to dig the city out. “There’s nobody around that clears the streets like the city of Beacon,” Casale said.

A new highway superintendent has not been named, but Casale said an announcement is imminent. Meanwhile, Thomaselli will continue part-time as a consultant to help his replacement get adjusted. He has some plans to travel but says he will likely keep working, perhaps in construction again. “If I’m not out of the house early, I get lazy,” he said. “I don’t want to do that.”