Conflicts with lawmakers lead to dismissal

The Putnam County Legislature kicked off the new year by relieving Legislative Counsel Clement Van Ross of his duties.

The attorney, who has been with the county for nearly 30 years, was serving a three-year appointment that extends through the end of 2017. To remove him from the position, the Legislature voted 8 to 1 to rescind the resolution in which he had been appointed. Only Dini LoBue (R-Mahopac Falls) voted no.

“The Legislature collectively decided we’d like to pursue a different path for our legislative counsel,” Ginny Nacerino (R-Patterson), who chairs the legislature, said after the Jan. 3 organizational meeting.

Nacerino gave no reason for Van Ross’ dismissal. “He served well for many, many years,” she said. “We have no disparaging remarks or negative comments.” 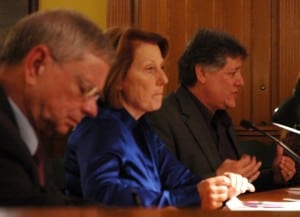 Nacerino said she and Joseph Castellano (R-Mahopac), who is deputy chair, notified Van Ross several weeks ago that the Legislature planned to vote to dismiss him.

Van Ross did not respond to a request to comment, but LoBue issued a statement.

“The abrupt dismissal of Legislative Counsel Van Ross leaves a vacuum at a critical time when the Legislature is most in need of his expertise and experience,” she said. “We are indebted to him for his commitment to the charter, open and transparent government demonstrated by making available to the public the  Butterfield kease, the Tilly Foster negotiations and the $40,000 settlement with the former Commissioner of Health.”

Van Ross was sometimes at odds with the legislators and county administration. He said, for example, that documents such as the proposed Butterfield lease were public and should be released, which contradicted the position of lawmakers and county attorney’s office.

Van Ross was criticized by some legislators in September when a sixth revision to the then-proposed lease for the county to rent space at the former Butterfield Hospital site in Cold Spring stalled in committee.

The county has since approved a 15-year lease with developer Paul Guillaro to operate a 6,000-square-foot senior center in the Lahey Pavilion at the site. The total cost of rent, construction and other responsibilities associated with the project has been estimated at $4.5 million. 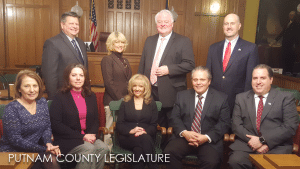 During a Sept. 14 meeting, Van Ross said lawmakers were unable to vote on a proposed amendment to the lease, which included the addition of several words to a clause, because the proposal had only been received the day before. The proposal came to the county from a Cold Spring Planning Board meeting that had taken place two nights before.

“There’s a 48-hour notice that is required for legislators, and if the [Planning Board] meeting is on the 12th, and we’re meeting here on the 14th, it’s difficult to see whether the 48 hours has been met,” he told the lawmakers at the time. “I don’t see where that memorandum of change dated Sept. 13 is within the 48 hours.”

Therefore, he said, legislators would need to be unanimous in accepting the proposal for a vote, which they were not (LoBue voted no).

This determination by Van Ross left some lawmakers — already frustrated with the often-stalled process to approve the controversial lease — angered that they were faced with another setback.

“It’s an atrocity and I don’t believe that you’re correct, Clem, and I’m going to check that for sure,” said Legislator Barbara Scuccimarra (R-Philipstown).

“We’re splitting hairs with this,” added Nacerino, who added that Van Ross should have notified lawmakers they would not be able to move forward unless they scheduled the meeting a day later.

“Clem, I wish we were advised of this because we’re wasting a lot of time,” he said. “We’re playing games. You’re wasting my time. I’m here tonight, I was here Monday; if there was a problem, our legislative counsel should have told us. Clem, we really have to start getting this right. Please advise us in advance. My time is very precious and I don’t want to waste any more time.”

Nacerino said the Legislature hopes to replace Van Ross by February. In the meantime, the county law department will advise lawmakers, she said.