Plans to convert the Cyberchron building on Route 9 into a modern-art warehouse face further review Jan. 12 when the Philipstown Planning Board holds a public hearing on modifications to the project.

The board scheduled a separate public hearing for the same night on a proposal to construct a 4,200-square-foot home in a protected ridgeline area off Lake Surprise Road.

Both hearings will occur at the board’s monthly meeting, which starts at 7:30 p.m., at the Butterfield Library, 10 Morris Ave., in Cold Spring.

The board approved the plans for Magazzino (Italian for warehouse) in 2014, but alterations brought the project back for an additional look.

Using the former Cyberchron company building on Route 9 south of the intersection with Route 301 and just beyond Nelsonville and Cold Spring, Magazzino is designed to house the Arte Povera collection of Giorgio Spanu and Nancy Olnick of Garrison. Five years ago, their first concept, a warehouse on their residential property on Avery Road, drew protests from neighbors concerned about the structure’s size and appearance. 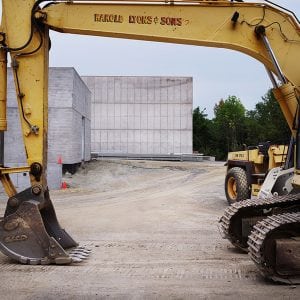 The construction has involved many local contractors (photo by Marco Anelli)

At the Route 9 site, located in a highway-commercial zoning district, Spanu and Olnick are upgrading the Cyberchron structure and adding a large wing to create a facility of about 20,000 square feet. Recent changes to the plans for the entrance, a security gate, a driveway, parking and demolition of an existing house and its replacement by a caretaker residence triggered the latest Planning Board review.

News articles last fall, including in The Current, that opaquely described Magazzino as an exhibition space, library, study center and location for lectures, performances and similar events prompted questions of whether the “warehouse” was also a museum or gallery. During their October and November meetings, Planning Board members and staff expressed uncertainty about the facility’s exact use, how many people would enter and leave it daily, whether it would provide adequate egress in an emergency and if it would have sufficient parking.

In a four-page statement dated Dec. 22, Spanu and his representative, Glennon Watson of Philipstown-based Badey & Watson Surveying & Engineering, sought to lay such doubts to rest. They stated that “the Olspan property will be a warehouse in which extensive collections of art will be stored and will also be used for educational and research purposes” and that the building will be “absolutely not open to the public but rather will be made accessible by appointment only in order to limit the number of visitors.”

Along with limiting the number of visitors, Olspan will limit parking, Spanu and Watson said. The parking plan, updated Dec. 22, provides for 35 spaces, including two for handicapped drivers; two for the residence and three for employees not living on the premises. They anticipate a maximum of 155 people — visitors plus staff — in Magazzino at a time.

Two state agencies also have taken an interest in the project.

The New York State Department of Transportation informed the Planning Board in a Dec. 5 letter that because the project is adjacent to a state highway, “any proposed work within the NYSDOT right-of-way requires a highway work permit.” The department asked for submission of project documents for DOT monitoring and said the applicants should initiate an evaluation by regional DOT authorities.

The state Department of Environmental Conservation also noted in a Nov. 30 report that a pond with protected status and freshwater wetlands lie in or near the project site. DEC noted it had granted a permit for work in 2014 but cautioned that some types of changes to the original plans may require an updated permit. The department likewise observed that the site is near, or home to, a population of the northern long-eared bat, a threatened mammal.

The other major project before the Planning Board on Jan. 12 is an 8.4-acre parcel at 4 Highland Ridge, off Lake Surprise Road, in a district zoned rural-residential. According to information from the Planning Board, the property is in ridgeline and hillside protection and aquifer areas. A septic system for a four-bedroom house was previously approved, but the site’s owners, Paul and Ellen Johnson, want to construct a seven-bedroom, 4,200-square foot home with an attached garage, decks and swimming pool. 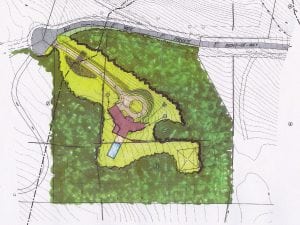 Plans submitted to the Philipstown Building Department for a 4,200-square foot home on Highland Ridge

In announcing the public hearing, the Planning Board stated the project entails “significant rock removal and tree clearing in the vicinity of the house-garage-pool areas.”

In November, the Planning Board referred the proposal to the town Conservation Board, which visited the property. After the visit, Max Garfinkle, Philipstown’s natural resources review officer, stated in a Dec. 15 memo that Conservation Board members wanted to prevent excessive tree-cutting and site disturbances in the project and to safeguard the viewshed.