Even coach admits a little surprise at early record

Entering his fourth season with the Beacon varsity boys’ basketball program, Coach Scott Timpano didn’t know what to expect. The Bulldogs graduated seven players and lost three to transfers. After having the same crew for two seasons (they finished 16-6 last year, reaching the Section 1 Class A quarterfinals), the Bulldogs have limited varsity experience, with only two returning players.

That’s why perhaps no one has been more surprised, and pleased, than Timpano with his team’s 7-3 start. The Bulldogs finished 2016 by taking the championship title at the Duane Davis Tournament with an impressive 76-64 comeback victory over Spackenkill. In their first game of 2017, they trailed at Peekskill on Jan. 4 for three quarters before grabbing the lead in the fourth and nearly pulling out the win. 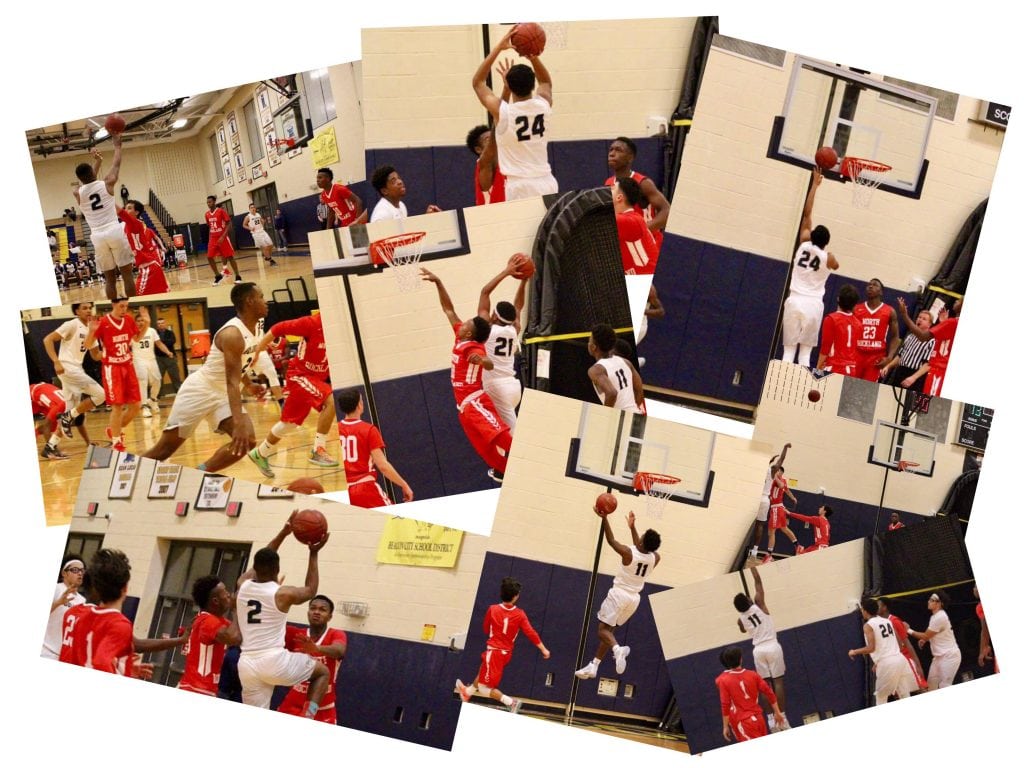 The Bulldogs during their win against North Rockland on Dec. 16 (Photos by Rem Dinio)

The Bulldogs face an even bigger test on Tuesday, Jan. 10, when they host Our Lady of Lourdes from Poughkeepsie. The Warriors are led by 6-foot-6 James Anozie, who last season as a junior averaged 25 points and 11 rebounds and had a career-high 22 rebounds against Beacon. The Bulldogs then travel to Lourdes on Jan. 26. The games against rival Hendrick Hudson (home Jan. 18, away Feb. 3) could also be tough.

“A lot of the work to start the season was on team-building and getting the players acclimated,” Timpano explained. “Now, as the team enters the mid-point of the season, we are doing what we need to do to be successful: we share the ball.”

After a 24-point defeat to New Rochelle at the Terence Wright Memorial Tournament Championship, the Bulldogs found themselves down five points late against John Jay East Fishkill, and Timpano said he wasn’t sure how his team would respond. But Zamere McKenzie hit a free throw to force overtime, and Jamon Galloway dominated inside with 6 points during the extra period for an 83-75 victory.

“Galloway is our constant double-double threat,” said Timpano. “He has a knack for rebounds and finds baskets in the post. His quick drop step and decisiveness are a big advantage.”

Less than a week later, with Coach Timpano on a family vacation, Beacon found itself down 48-34 in the third quarter to Spackenkill. The Bulldogs closed out the game by outscoring Spackenkill 42-16.

Alex Benson scored 22 points. “Benson is a dynamic player,” Timpano said of the senior. “He’s a phenomenal athlete, a star on the football team and for us. He is a ball magnet. On the defensive side, he disrupts opponents by how he is able to fly to the ball and then he turns it on with his offensive, using his speed and elusivity.”

McKenzie, one of seven juniors on the team, added 14 points. He also played varsity last year, as a sophomore. “I am so excited to see how he is developing,” the coach said. “He worked extremely hard in the off-season, a true gym rat, and now is having success on the court.”

Senior Andre Davis contributed 16 points against Spackenkill, although Timpano said his contributions don’t always appear in the box score. “Davis is so important to this team as a motivator,” he said. “He gets the guys up and settles them down. He has a calming effect on the team.”

Another key player who will need to play well for Beacon to make a run in the playoffs is Brandon Evans, a transfer from New Rochelle. A strong ballhandler and shooter, he also helps the team defensively, Timpano said.

The regular season ends for the Bulldogs at home against Lakeland on Feb. 9.

“It would be great to get to the [Westchester] County Center” in the state tournament, Timpano said. “Our goal is to qualify for sectionals, make a push and see what could happen. The most important thing for us as a program is to build better basketball players and better people.”