Making a life at sea, navigating by starlight

Depot Docs regulars may remember the showing, three Novembers ago, of Jillian Schlesinger’s enchanting film, Maidentrip, chronicling 14-year-old Laura Dekker’s single-minded determination to be the youngest person to sail the globe solo. And she films herself doing it! If your sea legs are feeling a little shaky these days, drop the Dramamine and jump ship at Garrison’s Landing on Friday, Jan. 13, when Depot Docs screens Tyler and Araby Williams Kelley’s Following Seas.

The story of the extraordinary lives of Nancy and Bob Griffith, who circumnavigated the globe not once but three times between 1960 and the late 1970’s, taking their 53-foot sailboat, and their kids, on 13 major voyages to places no small boat had gone before, is full of contemporary resonances. “We lived in tune with nature,” says Nancy Griffith, who made the filmed record of her family’s adventures and serves as the narrator. “Everything matters at sea, even the smallest thing. And everything has a consequence.” 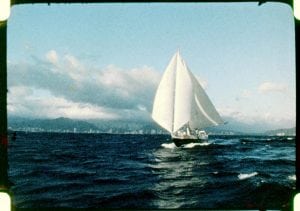 A scene from a home movie included in Following Seas

As one reviewer appreciatively noted, the Griffiths are likely “the most accomplished sailing couple you’ve never heard of.” Absolutely true for this writer, in addition to which, not being even a part-time, weekend sailor, why Following Seas? A “following sea” is a wave direction that matches the heading of your boat. If the waves of the body of water are heading in the same direction as you are, then the water is “following” the sailor’s boat. A following sea is considered good luck, a blessing.

Given the fact that the Griffiths chose to sail by celestial navigation, without    and other modern navigational aids or outside support, luck was a good thing to have, but it was not random or gratuitous. Luck, as was famously said, is “the residue of design,” made possible by intelligence, skill, instinct, attention, experience, practice and by the intention of the Griffiths to live fully and without apology a life that was self-determined. 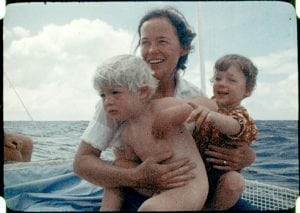 A scene from a home movie included in Following Seas

That the film was made at all was the result of a … lucky encounter. Guy walks into a bar in Greenpoint, Brooklyn, strikes up a conversation with another guy. They talk about sailing. One of them, Robert Teno Griffith, tells about his mother Nancy’s extensive collection of films shot in the course of his family’s travels as he was growing up, from the Indian Ocean to the Antarctic, Hawaii to New Zealand. The other guy, Tyler Kelley, is a sailor too, and a journalist, and his partner, Araby Williams, is a filmmaker.  He gives her a call: “We need to make a movie!”

Araby Williams is credited, with Nancy Griffith, as cinematographer and as editor. She effectively filmed and integrated interviews with the Griffith children and with Nancy, and she’s made brilliant use of the archival footage, even including film that was weathered or damaged to great effect, reminding us of the often-difficult living and working conditions on the boat. Nancy, it should be noted, was using a hand-wound 16mm Bolex camera. Digital schmidgital, one can hear her saying. But her record of the Griffith family, which included three children by previous marriages and two of Bob and Nancy’s, has little of the finished, professional sheen we’ve come to expect from today’s high-tech filmmakers. And this is a perfect reflection of what the Griffiths were about: making a life at sea, navigating by starlight. “Those forces [of nature] are not evil, they’re just indifferent. You have to live with what comes … and everything has a consequence.” 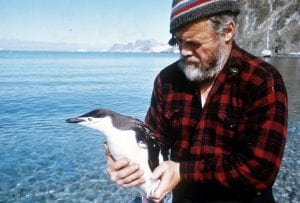 A slide featured in Following Seas

Hearing Nancy’s narration is one of the great pleasures of the film. She was in her 70s when the Kelleys began their six years of work on Following Seas. Bob had died as he was about to take off on a solo sail in 1979, and while we occasionally get to hear his recorded voice, it is Nancy’s voice — clear, strong, articulate, and apparently with total recall — that tells the story, not as story, but as it was lived.

Following Seas will be shown at the Philipstown Depot Theatre, Garrison’s Landing, on Friday, Jan. 13, at 7:30 pm. The guests will be co-directors Tyler Kelley and Araby Williams Kelley. There will be a Q&A after the screening, followed by a reception. For more information call 845-424-3900. For tickets, visit brownpapertickets.com.