“Oh Lord, we do not ask you to give us wealth. But show us where it is!”

While I’d like to be able to attribute this week’s column to the result of advance planning in anticipation of (Robbie) Burns Night on Jan. 25, I must admit once again that it is the result of generous gift, in this case a large bunch of leeks from my landlady/neighbor/friend, N.

Initially a bit flummoxed, I remembered a healthy flirtation with soups of all kinds and the discovery of Scotland’s “national soup,” Cock-a-Leekie (or Cockie Leekie), the humble but satisfying winter stew of chicken (cock) and leeks (leekie).

Much more approachable than the more traditional haggis, Cock-a-Leekie stems from the same thrifty culinary tendency to make the most of “lesser” ingredients. Leeks are, of course, one of the heartier garden vegetables and may be overwintered for use when not much else is available. (Another example is Nips and Tatties, a Burns Night staple of mashed turnips and potatoes.)

If you search online for recipes for Cock-a-Leekie, you will get concoctions dating back to the 16th century for a peppered, beef-based broth with leeks in which a fowl of questionable youthfulness is boiled for three to four hours, the resulting soup’s heartiness bolstered by the inclusion of pearled barley (or rice or potatoes) and curiously garnished with prunes and, in some cases, a generous splash of Scotch whisky. The latter prompts a name change to Auld Reekie, though it is suggested that appellation was really the result of the coal fires used for cooking. 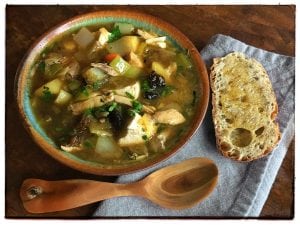 However, boiling a chicken for three to four hours seems just plain wrong and the inclusion of beef equally unnecessary. Better and thriftier (to honor the Scottish intent) to cook the bird in a light, flavorful broth created from the tough but flavorful green parts of the leeks and a handful of other staples.

Rather than boil a bird, I modeled a technique from a recipe for Chinese boiled white chicken I came across in Christopher Kimball’s Milk Street magazine. (Full disclosure: I was a designer for the charter issue.)

As decidedly unlovely as the name sounds, in practice the bird is gently poached in a simple vegetable broth, cooled a bit, then skinned, deboned and cut into chunks, providing both meat of a lovely, velvety texture and a rich, strained broth.

And so, while not completely by-the-book or historically accurate, this two-part process will, with the addition of my preferred “tatties” and prunes (which add a subtle sweetness and richness), result in a satisfying one-pot winter meal. It begs for naught but a slice of buttered toast for complete enjoyment, Burns Night or not.

For the chicken and broth

For the chicken and broth