Beacon High School has forfeited its 2016 varsity football victories and seven wins of the 2016-17 varsity boys’ basketball season after determining that a player who was a member of both teams was ineligible. 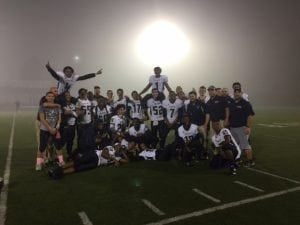 The Bulldogs celebrate their fourth victory on a foggy night in October. (File photo)

Administrators reported the situation to the New York State Public High School Athletic Association “once we became aware of the status,” said school board President Anthony White. He did not say what infraction caused the player, who was not named, to be ruled ineligible. But at a Jan. 9 school board meeting the district’s interim superintendent, Ann Marie Quartironi, characterized it as an error by the high school and said that the student “was in no way at fault.”

“The district regrets the error and is working actively with Section 1 [officials] to ensure that any similar incidents are prevented in the future,” she said. “The forfeitures are in no way a reflection of the hard work and sacrifices of the student-athletes in both the football and boys’ basketball programs.” Section 1 includes schools in the lower Hudson Valley from Dutchess, Putnam, Rockland and Westchester counties.


The issue has been corrected and the student has rejoined the basketball team for practices, said White. He said the district is trying to determine “where the gaps were, because we don’t want this to happen again.”

After finishing 16-6 last year and reaching the Section 1 Class A quarterfinals, the Beacon basketball team was off to a somewhat surprising 7-3 start, which included winning the Duane Davis Tournament on Dec. 31 with a 76-64 victory over Spackenkill.

Reached on Jan. 10, Beacon basketball coach Scott Timpano said that his players were “devastated” by the news but recovered with a great practice that day as they prepared to play at Sleepy Hollow. (The Bulldogs won, 64-56, in overtime to improve to 1-10.) 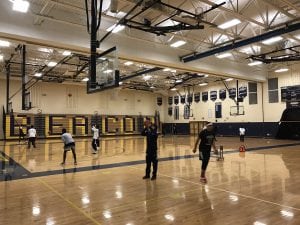 At 6 a.m. on Jan. 10, the day after the announcement that the Beacon boys’ basketball team would forfeit its seven wins, coach Tom Timpano posted on Twitter: “This is what dedication looks like.”

Despite the setback, Timpano said he’s upbeat about this team’s prospects for the postseason. A Section 1 team needs 32 points to qualify for the state tournament, and it receives four points for each win as well as bonus points at the end of the season based on its victories against Section 1 opponents. Timpano said on Jan. 10 if the Bulldogs can win five of their 10 remaining games (including a Jan. 10 game against Lourdes that was postponed), a postseason appearance is still possible.

Beacon football coach Tom Truscello, in his first season with the team, did not respond to a request for comment.