As befits a city where visual arts play such a prominent civic role, Beacon will celebrate the talent of its younger artists with an exhibit of works by Beacon High School students that opens Jan. 14 at The Gallery at The Lofts. A reception is scheduled for 1 to 4 p.m.

The exhibit will feature studio art, ceramics, photography, digital art, drawings and paintings by students working under art teachers Claudine Farley, Mark Lyon and Sergio Perez, who each chose 15 to 20 pieces for the show. It will run through Feb. 25.

Molly Robinson, a sophomore, has two pieces in the exhibit. She says her advanced art class has been working on observational pieces and composition — “figuring out how different mediums work and how light and shadows work and how to create them in pieces.” She says she only recently discovered how much of a passion art is for her, and that the challenges have given her confidence to the point she plans to become an art teacher and is assembling a portfolio for her college submissions. 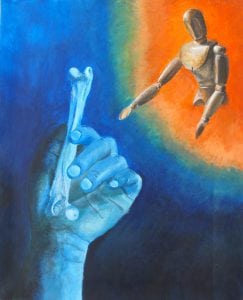 One of Robinson’s works was a homework assignment: create a narrative and convey all or part of that narrative in art. “It was hard to get the point across, but it wound up being cool to see how the class interpreted it,” she says. Seeing her work in a gallery is “uplifting,” she says. “I feel grateful to Mr. Lyon for giving me the opportunity.”

Robinson feels Beacon High is a good place to be a budding artist. “In this school a lot of people value art, especially with all the galleries on Main Street, and Dia, a lot of people are expressing themselves in Beacon.” 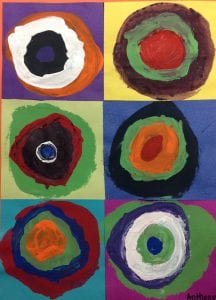 The Howland Public Library will open an exhibition of student artwork from the Beacon School District’s four elementary schools with a reception on Saturday, Jan. 28 from 2 to 4 p.m. (The snow date is Feb. 4.) The frames for the show, which will run through Feb. 18, were donated by the late Warren Hurley after he exhibited at the library in April. The Beacon Arts & Education Foundation and Friends of the Howland Library also contributed, and the frames will be used for all Beacon City School District exhibits at the library, which is located at 313 Main St.

Gallery 66 NY in Cold Spring is displaying its fourth annual high school juried art exhibit through Jan. 29 with 23 artists from eight schools in six counties who interpreted the theme “Story Tellers, Fables and Fiction.” The gallery, at 66 Main St., is open Friday, Saturday and Sunday from noon to 5 p.m.

The Center for the Digital Arts in Peekskill is holding its annual student show from Thursday, Jan. 19 through Feb. 18, with a reception scheduled for Feb. 7 from 3:30 to 5:30 p.m. and a screening of multimedia work at 4 p.m. The show includes both traditional fine arts and digital illustration and animation. The center is located at 27 N. Division.

The high school’s digital art classes were introduced four years ago. “We have kids come in who have completed CAD (computer-assisted drawing) or done graphic design at BOCES and others who don’t have a computer at home,” says Perez, who teaches the courses and supervises independent study. Class projects include 3-D modeling, working with Adobe PhotoShop and projects like the one which generated the work being shown: students were asked to create pieces based on their response to music. 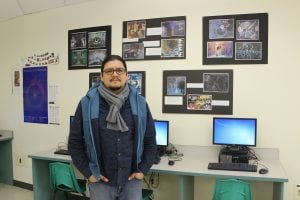 Digital art teacher Sergio Perez in front of work made by students in his classroom at Beacon High School (Photo by A. Rooney)

“It’s easy to engage with that because all the input is there,” Perez explains. “Later they create commercial posters, using text as the central component.” Perez says the students are always happy to have their work displayed. “I try to keep a broad cross-section and that’s why the music project works so well — it’s a subjective subject matter and isn’t always just about who’s best at PhotoShop.”

First held at RiverWinds Gallery on Main Street, the show moved to The Lofts gallery five years ago, according to Claudine Farley, the Beacon school district’s art coordinator. “It’s not just of value to the students,” she says. “The support we get from the arts community is phenomenal.”

Farley says interest in the arts at the school ebbs and flows; the ceramics class has a new kiln, and there is discussion of reviving a textile design class. The high school has its own gallery in which exhibits are typically synced with performances at the theater across the corridor. 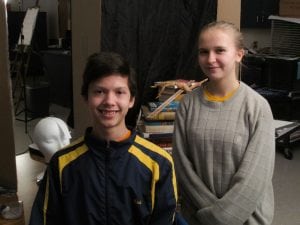 For senior Richard Kish, who plans to be an engineer, art was not a big part of his life until he says he had an “Oh, wow!” moment. “I realized that art is not just important in and of itself, but it’s a way of connecting with science,” he says. “It builds your visual and spatial skills and also opens up the imagination.”

Like Robinson, Kish has two works in the show. One is a portrait of his dining room in blue and orange. “It’s one of my favorite spots to sit and I liked the fact that I could also include the view into the kitchen,” he says.  The other is a three-panel drawing of a sprinter taking off from the blocks. Kish set up a tripod and took photos of himself in action, which he used as models for his drawings. (Kish is a star on the Beacon team and was chosen on Dec. 23 as the Highlands Current Athlete of the Week.)

(On Jan. 11, Kish was awarded a gold key and two silver keys in the Scholastic Art Awards competition, and Kalina Brinas, who also has artwork in The Lofts show, received three gold keys and four silver keys. Their artwork will be included in an upcoming show at SUNY New Paltz and the gold key work will be put into competition for nationals.)

Studio art teacher Mark Lyon, taking a short break from supervising a classroom of students doing knife design work for a linoleum printing project, observes that “the exhibit is great because we take a piece of their art and have it out in the world, beyond the display cases at the school, beyond their folders, grades and credits, so that it becomes a part of the community.” It’s important, he says, for student work to be part of the art scene in Beacon.