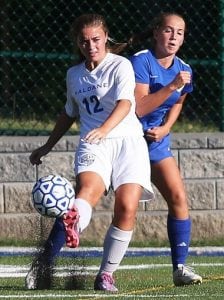 Marissa “Missy” Lisikatos, a senior, was named in early December to the first team All-State for Class C girls’ soccer by the New York State Sportswriters Association for the third season in a row. It was the final accolade after an incredible five-year career at Haldane.

Lisikatos also was named to the Section 1 team four seasons in a row, received All-League honors for each of the five years she played on the varsity squad, and this year was voted by Section 1 coaches as Class C Player of the Year. Finally, Lisikatos was named as a Section 1 Elite 12 player, an academic honor given to 12 senior players.

Lisikatos will play soccer at LeMoyne University in Syracuse in the fall. She is a starter for the Blue Devils basketball team, as well.

Haldane Coach Gary Van Asselt knows he will have a tough time replacing his star. “Missy’s control of the game dictates both her team and the opposing team’s decision making,” he said. “She started playing defense early in her career and moved to mid-field as a 10th and 11th  grader. This year we moved her to an offensive role and the results were outstanding. She scored 16 goals to go along with 12 assists.”