The legacy of Martin Luther King Jr. will be commemorated on Sunday and Monday, Jan. 15 and 16 in what are now traditions in Garrison and Beacon.

Conceived as a way to keep the holiday from becoming just another day off from work and school, Beacon’s singing parade is in its fourth year and will be accompanied by breakfast, dinner and an essay contest focused on nonviolence. 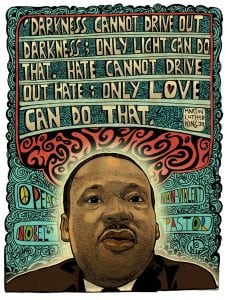 The Beacon parade was founded by Pete Seeger shortly before his death on Jan. 27, 2014. According to organizer Bonnie Champion, who serves as coordinator with Sharlene Stout, it was Seeger’s idea to have a singing parade that would double as a civil-rights march recognizing King as a “great man who changed the world. He felt that people were not paying attention to the real reason for the day.

“It was so important to Pete that he actually stayed alive for that parade,” Champion said. “He was unable to participate because of his health but he was so very happy when he found out how successful it was. He died exactly one week after the parade.”

The essay contest attracted more than 800 entries last year from elementary, middle- and high school students. Six winners this year will receive $50 awards donated by Rhinebeck Bank. (The deadline for entries has passed.)

The timetable for Beacon

At the Desmond-Fish Library, Director Jen McCreery calls its Martin Luther King Jr. celebration, now in its 21st year and sponsored by the Friends of the Desmond-Fish, a “big part of our history — it’s a tradition we want to uphold in the community.” Last year the library organized a presentation on Islamophobia, and the year before that on police brutality. 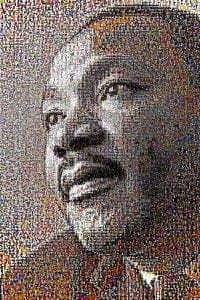 This image of Martin Luther King Jr. was constructed by an anonymous artist with profile photos of people who had tweeted the words, “I’m not racist, but …”

This year, she said, a patron suggested a look at incarceration. That led to the Rehabilitation Through the Arts group, and to Katherine Vockins and Charles Moore, who will speak about their work with area prisons. James O’Barr will also provide a general presentation on incarceration trends in the U.S.

The Sunday program will begin with supper, followed by a talk by Vockins and Moore. Their organization works in five maximum- and medium-security prisons in the Hudson Valley and uses theater, dance, music, voice, writing and visual arts as tools to develop life skills and change behavior. RTA has launched a program with its alumni to develop a play about the experience and challenges of coming home. 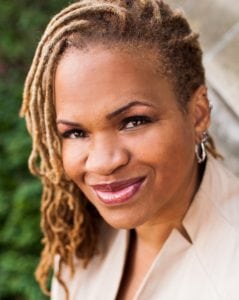 Moore has been involved with RTA since 2004, while Vockins co-produced Dramatic Escape, a documentary that followed RTA through its production cycle of A Few Good Men at Sing Sing.

The family celebration will have interactive storytelling with performer Gha’il Rhodes Benjamin that includes movement, poetry and songs from the Civil Rights era. Her collaboration with Jeff Haynes, Pete Seeger: The Storm King, was nominated for a Grammy for Best Spoken Word Album.

Both programs are free. The library is located at 472 Route 403. For more information, visit desmondfishlibrary.org.