When five busloads of Highlands residents leave Beacon at 3 a.m. on Saturday, Jan. 21, to attend the Women’s March on Washington, D.C. — the day after the inauguration of Donald Trump as president — and many more descend on Dag Hammarskjold Plaza for the Women’s March on NYC, a great number of them will be wearing knit pink hats.

Pink pussyhats, to be exact. They are part of a national campaign called The Pussyhat Project (pussyhatproject.com) that has been led locally by Katy Hope, owner of Beetle and Fred, a new retail store on the west end of Main Street in Beacon that provides “supplies for the modern sewist.” The Pussyhat Project, initiated in November by two Los Angeles activists, has grown to the point where many craft stores are selling out of pink yarn. 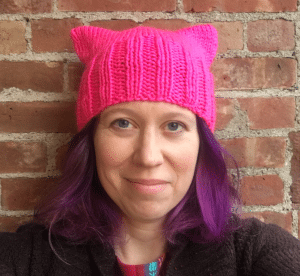 As she speaks to a reporter, Hope transforms a jumble of pink yarn into a hat with two kitten ears poking out of the top. Because she must mind the store and can’t attend either march, Hope says knitting hats and encouraging others to come by Beetle and Fred to do the same is her way of participating.

Knitting as a political statement is nothing new in Beacon — remember the great yarn bombing wave of 2014? — but as “craftivism” grows, Hope believes more makers will realize their creations aren’t just for show.

“There’s a tendency among makers that once you’ve made something you don’t want to mess it up,” she explained. “You don’t want to cut it, you just want to keep it and pet it. But it’s a resource. Let’s use it, to welcome a baby, or make things just the way you want them, or to make a statement.”

Many stores and restaurants will have “soft openings,” when they open the doors only for friends and family to smooth out the kinks. As befits a store that sells fabric and knitting supplies, the soft opening for Beetle and Fred was particularly soft.

“A few days after Thanksgiving, I took the paper down from the windows and unlocked the door,” said Hope while sinking into one of the store’s couches as she worked on her pink pussyhat. “And for a couple of weeks, that was it.”

Beetle and Fred — the name comes from Cockney rhyming slang for “needle and thread” — has since had a grand opening. It was the end of the season for fabric, so Hope said she held off stocking the shelves. But now, she said, the product is flowing in, “more kinds of threads, embroidery clothes and different patterns because I can’t help myself.”

Also, there soon will be yarn.

“Everyday someone sticks their head in the store and yells ‘Do you have yarn?’ ” Hope said. Since the former Clay, Wood, and Cotton a few doors down stopped carrying yarn, Beacon has been in a yarn gap. “It’s coming, but I want to find one particular line of something special.” 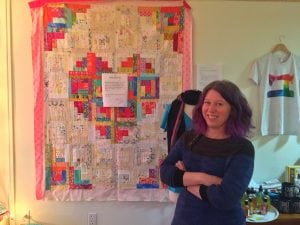 A heart fills the center of a quilt-in-progress at Beetle and Fred. (Photo by B. Cronin)

Hope says she was inspired to open a store in Beacon about three years ago. She was working as an editor but missed the time she spent working and shopping at fabric stores. Five years ago, finding a space would have been easy, but three years ago, not so much. “It’s a good problem for a town to have, not having available storefronts,” she said. “But of course five years ago I had a toddler and an eight-month-old, so it probably wouldn’t have happened at that point!”

Finding an ample, well-lit space was a priority because Hope knew that she wanted Beetle and Fred to be more than a storefront. In the back of her space are four sewing machines that can be rented by the hour, as well as large, communal tables for projects and classes. The initial classes will be in basic sewing and quilting, but Hope says customers have offered to teach quilting, embroidery, surface design and visible mending, “which is good, because God knows I can’t teach everything myself.”

The store will also be open late on Thursday nights for what Hope calls weekly Make Out groups in which crafters grab a seat, rent a sewing machine or bring their own, pop open a bottle of something or other, and create.

Hope said she recently took a class with the quilter Chawne Kimber, who has drawn praise for her intricate quilts that address topics such as police brutality and violence against women. For Hope, Kimber’s work is an example that while quilts and other crafts can produce items that are beautiful and useful, they also have the potential to make an artistic statement.

While explaining this, Hope points to a quilt hanging near the entrance. She began creating it months ago as part of a project to honor victims of the shooting at the Pulse nightclub in Orlando. She set it aside while opening the store but says she still plans to donate or sell it for charity.

“Sometimes you can feel so helpless, such utter dismay over the way the world is going, and you feel so small,” she says. “So you ask yourself what you can do. Well, I can sit down and I can sew. And I can try and make something that might give someone comfort.”