A first was set in March as the Haldane boys’ basketball team reached its first Class C state final. Although it was overwhelmed in the championship by Buffalo’s Middle Early College, the run to Glens Falls was a natural progression for a program that has dominated Section 1 for eight seasons in a row. Four of the school’s recent graduates are playing at Division III colleges. 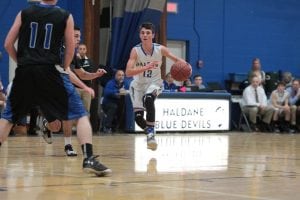 Nick DiPalo (12) prepares to pass in a home victory over Edgemont on Dec. 8 (Photo by Sharon DiPalo)

The previous year the team had reached the state final four, so it was gratifying to not only return after losing its core players but to reach the finals, said Coach Joe Virgadamo, a Haldane grad who is now in his 11th year at the helm.

“Each year is different,” he said. “With that comes the challenge. It’s so much fun to adjust, learn and work with these guys on becoming better players and people.”

Haldane relies heavily on multisport athletes. For a school that graduates about 75 students a year, it’s essential to have athletes participate on two to three teams.

“I am a huge advocate of multisport play and have found athletes who play more than one sport avoid overuse injuries,” Virgadamo said. “It also makes it fun to coach. We were turning the ball over so in practice we talked about taking the single and stop going for home-run passes. The baseball guys lit up. Then we addressed the defense and talked about angles of pursuit, which woke up the football guys.”

Blaine Fitzgerald was the goalkeeper for the soccer team and now, at 6-feet-7, is averaging 18 points and 10 rebounds per game at center for the basketball team. Virgadamo believes he has the ability to play at the collegiate level in either sport. “Blaine is a true post player,” says Virgadamo. “He runs well, rebounds and is good in the pivot.  The ball has a way of finding him with his length.” 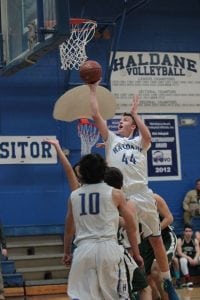 Blaine Fitzgerald (44) drives to the basket while Brandon Twoguns (10) looks on in Haldane’s home opener on Dec. 6 against Solomon Schechter (Photo by Sharon DiPalo)

Junior point guard Nick DiPalo is adjusting well to his first season of varsity. He has dedicated himself to basketball and also hopes to play in college. “He has great vision; he is a scoring point guard,” said Virgadamo. “He handles the basketball well and is a confident shooter.”

Junior guard Aidan Siegel is a double-digit threat and “a slasher/penetrator who sparks the offense,” the coach said. 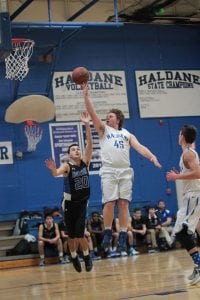 Sophomore Kyle Sussmeyer has battled foot injuries as well as the effects of cystic fibrosis but Virgadamo thinks he could be a special player with college potential because of how well he can shoot.

Section 1 is competitive, as always. The challengers to Haldane’s reign are lining up. Solomon Schecter has two wins already against Haldane, while Tuckahoe, Hamilton and North Salem (who the Blue Devils play at home on Jan. 27) are formidable. But Virgadamo remains optimistic about his 5-5 team. “If we can earn 32 points to get to the Section 1 playoff, there is no reason we can’t get to the Westchester County Center” for regional competition.