The Beacon boys’ basketball team walked into the well-lit, cardinal-red Sleepy Hollow gym on Jan. 13 with 37 minutes on the game clock, dressed in their game shorts and white with navy long sleeve shooting shirts donning Beacon on the front and the player’s number on the back, high up on the center of the neck.

This would be the Bulldogs’ first opportunity on the court to salvage a season that had seven victories taken away on Jan. 9 due to a senior who had been found to be academically ineligible in a snafu that school officials admitted was the district’s fault. He had scored 22 points in their last victory, over Spackenkill, but now sat in street clothes in the stands. (According to one report, the senior had enough credits and needed to only take three classes; to be eligible for sports, a student must be enrolled in four.)

The Bulldogs would make the most of the opportunity, defeating Sleepy Hollow, 64-56, behind Jemond Galloway’s 22 points and 12 rebounds. The team was humbled by Lourdes the next day, 73-43, in a makeup game but on Jan. 18 edged Hendrick Hudson, 54-52, to improve to 2-11. Seven games remain. The team must earn 32 points to make the state tournament, with four points awarded for each win and bonus points added at the end of the season based on the final records of the teams they defeat. 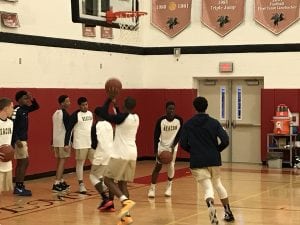 Beacon gets loose in warm-ups (photo by L. Klein)

In Sleepy Hollow on Jan. 13, it was a back-and-forth affair with the Dutchmen leading after one quarter, 20-16. The Bulldogs had no answer for Sleepy Hollow’s 6-foot-7 forward Andrew Laub, who had 10 points, including a pair of three pointers. The Bulldogs defended in a packed 2-3 zone.

In the second quarter, Sleepy Hollow exploited the interior of the Beacon defense with strong drives and by attacking the glass.  The Dutchmen lead swelled to 36-21 and it looked as if Beacon was ready to return to their bus. Sleepy Hollow extended its zone, pressuring the Beacon guards above the three-point line.

But Beacon rallied. Late in the quarter, Galloway looked unstoppable, scoring the last six points to cut the lead to 10 going into the half.

“I can’t say enough nice things about Jemond,” said Beacon coach Scott Timpano. “He’s a harder worker, he’s tenacious, he didn’t come out of the game for one second, playing through it all. He’s a monster inside. When we get him the ball great things happen; it changes how teams have to play us and it opens up our offense.”

At the half, Galloway had 11 points and Brandon Evans 8. Laub led Sleepy Hollow with 16.

Coming out of the break, Galloway imposed his will. Even a botched slam dunk that saw the ball fly 12 feet up in the air fell back through the net. On the next trip down he completed a dunk, and suddenly it became a six-point game, 38-32, with the momentum favoring Beacon. 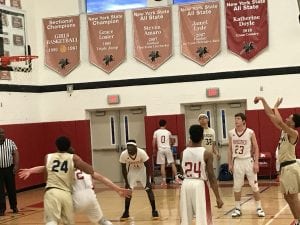 Brandon Evans made back-to-back layups and was fouled on the second for a three-point play that cut the lead to 44-42 at the end of the third quarter.

“Evans is a smooth player, dynamic,” says Timpano. “He has a deceptive first step attacking the crease of the zone. He has a lot of lift, he’s electric to the basket and he helps us on the glass. He’s a phenomenal addition to the team.”

In the fourth quarter, the Bulldogs adjusted their zone to a 1-2-2, which gave them better coverage on the perimeter and protected the middle of the lane. Zamere McKenzie, a non-factor for much of the first three quarters, awoke, driving the basketball strong for a layup to tie the score at 46.

The game stayed knotted at 46 after three empty Beacon trips with Evans trying to do too much before Sleepy Hollow jumped in front again. A McKenzie steal led to a free throw and Galloway converted a tip-in to put Beacon up 49-48 with 43 seconds remaining. McKenzie stole a pass but missed the layup; Davis was there for the follow to give Beacon a three-point lead with 10 seconds left.

“Our players have great speed and are ball hawks,” said Timpano. “If they stay tucked in, with active feet, we can get turnovers.”

With five seconds remaining, Sleepy Hollow inbounded the ball from side court.  The gym was waiting for Laub to get the ball. The Dutchmen started him under the basket and ran him to the top of the key. The ball went to the left side, where Jack Starkey drained the three to force overtime.

The gym erupted, the Sleepy Hollow bench celebrated and the Bulldogs stumbled over to the bench. But sparked by McKenzie and Evans, the Bulldogs pulled  in front during the OT, 59-53, with 2:20 left. Laub drained a three to get Sleepy Hollow close but the Dutchmen never got closer. Beacon led by eight with 25.9 seconds left, in large part because of the defense of Deonte Komisar.

“Deonte has an incredible wingspan,” said Timpano. “Today, he did a great job getting out in the corners. He was all the difference in covering Laub in the corner, to take away his shooting.

“This win is everything; it’s our first win,” Timpano said after the game, obviously proud of his team’s effort. “It starts to build that foundation of belief in ourselves once again. It doesn’t get easier.”