But state still warns against eating fish and crabs

Since 2009 General Electric has been forced to undertake a multibillion dollar project to remove industrial pollutants known as polychlorinated biphenyls (PCBs) that the company discharged into the upper Hudson River between 1947 and 1977. Now, having dredged 2.65 million cubic yards of contaminated river sediment, GE has requested that the federal Environmental Protection Agency issue a Certificate of Completion, ending the court-ordered cleanup.

The request comes months before the EPA will issue a five-year review of the cleanup to gauge the effectiveness of the project and determine if GE should keep going. Should the EPA issue a Certificate of Completion now, before its report, it would limit the agency’s ability to force GE to undertake additional cleanup if the agency determines more work is needed. 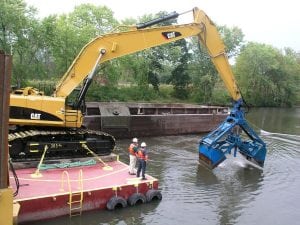 In a Dec. 23 letter to the director of the EPA’s Hudson River Field Office in Albany, the head of global remediation for the company submitted a Remedial Action Completion Report, arguing that GE’s work was done and that waiting five to eight years for long-term monitoring data to be collected by the EPA was not a requirement of the initial consent decree.

The GE executive, John Haggard, noted that dredging on the Hudson had been ongoing 24 hours a day, six days a week, six months a year, for six years. “As a result of the project, a majority of the PCBs in the Upper Hudson were removed, and dredged areas were restored with a massive habitat restoration program,” he wrote. He added that a sediment processing facility in Fort Edward had been closed and all leases and access agreements related to the project terminated.

The company’s request comes at a time when state agencies and environmental nonprofits are releasing their own assessments of the dredging.

“Everyone should be concerned that GE is hoping the EPA will rubber-stamp its cleanup,” said Scenic Hudson President Ned Sullivan. He cited “clear scientific data indicating the job is not done.”

In December the state Department of Environmental Conservation issued a report modeled on EPA criteria that found high levels of PCBs remain in Hudson River fish. The findings were not a surprise to environmental groups that argue the benchmarks the EPA requires of GE are based on out-of-date research. Many of the groups banded together in a last-ditch effort to get the company to voluntarily expand the cleanup. 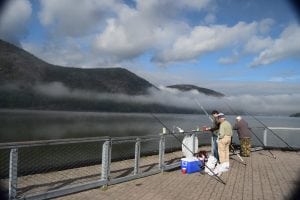 Early morning hopefuls at the Cold Spring dock last fall. New York State recommends anglers limit how many fish they eat from the river due to PCB pollution. (Photo by Michael Turton)

That action, although unsuccessful, seems prescient in the wake of two more recent reports, one by the state Department of Health and another issued jointly by Scenic Hudson and the Sierra Club, about anglers who eat fish taken from the river. Despite years of educational efforts by the DEC and other groups, many of the fishermen interviewed were unaware of the hazards of eating Hudson fish.

Studies have shown that PCBs may cause adverse health effects in humans, including cancer, and can damage the immune, nervous and endocrine systems. PCB pollution is found all over the world. In the Hudson and other rivers, the pollutant settles into the sediment, where it is eaten by small organisms and fish and passed to humans who eat the fish. PCBs accumulate in fat and in organs such as the liver.

PCBs pose special risks for younger women because they can be passed from a mother to her unborn child or through breast milk and have been associated with preterm delivery, low birth weight and learning defects.

Due to PCB contamination, the state Department of Health recommends limited or no consumption of fish from the river. See health.ny.gov/fish.

Under state guidelines, children and teenagers under the age of 15, and women under the age of 50, should not eat any fish or crab caught from the lower Hudson. Men over the age of 15 can eat certain species sparingly, usually not more than 8 ounces a month. The DEC also advises anglers to cut away and discard the fattiest sections of fish, or at least cook on grills so that excess fat drips away.

But the new reports found that forbidden species such as catfish continue to be caught in the river for meals and are usually fried. In a Scenic Hudson/Sierra Club survey, a third of fishermen said they ate more river fish than the guidelines. Eleven percent of the anglers interviewed by the Department of Health reported eating river fish daily.

Both surveys showed that the majority of “subsistence” anglers on the Hudson are African-American and Latino men, although language barriers prevented the researchers from accurately surveying Asian anglers who congregate at spots along the Hudson in large numbers. (The state Health Department has posted warning signs in Spanish along the river, including in Beacon.)

“It is distressing, but not surprising, to see that so many people are still eating PCB-contaminated fish” from the river, said Manna Jo Greene, the environmental director for Hudson River Sloop Clearwater. “People need this source of protein for subsistence and they simply have to gamble with the health risks. It means that EPA’s so-called ‘institutional controls’ to protect human health are not working. Protecting people is why we need a more robust cleanup of Hudson River PCBs.” 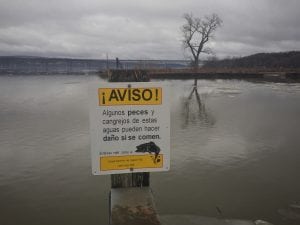 A sign in Spanish at Beacon’s Long Dock park warns anglers about fishing and crabbing in the Hudson River. (Photo by B. Cronin)

Although the EPA has not ruled on whether GE must continue the cleanup, the state agencies and environmental groups hope their reports lead to the company being ordered back to work.

“GE wants to declare ‘mission accomplished’ when fish from the Hudson remain unsafe to eat,” said Dan Raichel, an attorney with the Natural Resources Defense Council. “Unless the EPA can somehow now miraculously demonstrate otherwise, then the cleanup is incomplete by [federal] Superfund standards. The people of New York who rely on this river for food, recreation and jobs deserve more from this corporation.”