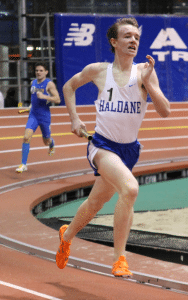 Nick Farrell anchored the 4×800-meter relay at the league championships in 2016. (Photo by Michael Haines)

Farrell continues to show why he’s one of the best 1,600-meter and 3,200-meter runners in Section 1, with a strong performance at the League 3B Championships on Jan. 15 at the Armory in New York City. The junior, who also runs cross-country, won the 3,200 in 10:28.06, edging a competitor from Pawling by half a second, and finished third that same day in the 1,600 in 4:47.52. “Nick is setting the groundwork for a big jump outdoor season and with the continued hard work will be a contender to make states this spring,” said Coach AJ McConville.