On Jan. 20 at noon, Donald J. Trump was sworn in as the 45th president of the U.S., despite having won 2.9 million fewer votes than his opponent, Hillary Clinton. He won more Electoral College votes, a measure of who received more votes in each state and D.C., and that’s what matters. The presidential candidate who did not win the popular vote has only taken office five times before, most recently in 2000 and prior to that three times in the 19th century.

Sandy Galef, a Democratic member of the state Assembly whose district includes Philipstown, said her office was flooded with calls, letters and emails following the Nov. 8 election from constituents asking how Trump could win despite receiving fewer votes than Clinton.

In response, Galef convened a panel on Jan. 12 at the Croton Free Library to discuss the Electoral College and possible changes. Her guests were Assemblyman Jeffrey Dinowitz, who sponsored a state bill to reform the Electoral College; Hendrik Hertzberg, a longtime editor and writer at The New Yorker and board member of FairVote.org; and Jeanne Zaino, a professor of political science and international science at Iona College. 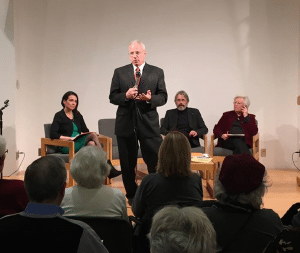 Jeffrey Dinowitz, a member of the state Assembly who introduced legislation to reform the Electoral College, speaks at a forum held Jan. 12. (Photo provided)

In the Electoral College system, the number of electors for each state is determined by its population. It is designed so that an individual vote in a smaller state counts more in proportion to an individual vote in a larger state. This means, Hertzberg noted, that a vote in Wyoming counts about 50 to 60 times more than a vote in California, since the state’s small population makes each person’s vote more significant in the statewide tally. That tally determines which candidates receive the state’s electoral votes.

“As political scientists, we ask ourselves what makes for a democratic election?” asked Zaino. “And one of those things is that everyone’s vote should count equally. In our system, that’s not the case.”

Supporters of the Electoral College argue that it ensures that rural and less populated states and sections of the country are not left out of the campaign. If the popular vote determined the election, candidates would simply campaign in major cities to reach as many people as possible.

However, members of the panel argued this reasoning is flawed.

“Mathematically, it’s impossible to win the presidency by just visiting urban areas,” said Zaino. “And it’s hard for those of us near New York City to realize that, because New York City is so much larger than any other city in the country.” While New York City has more than 8 million people, the second most populous city, Los Angeles, has fewer than half that. 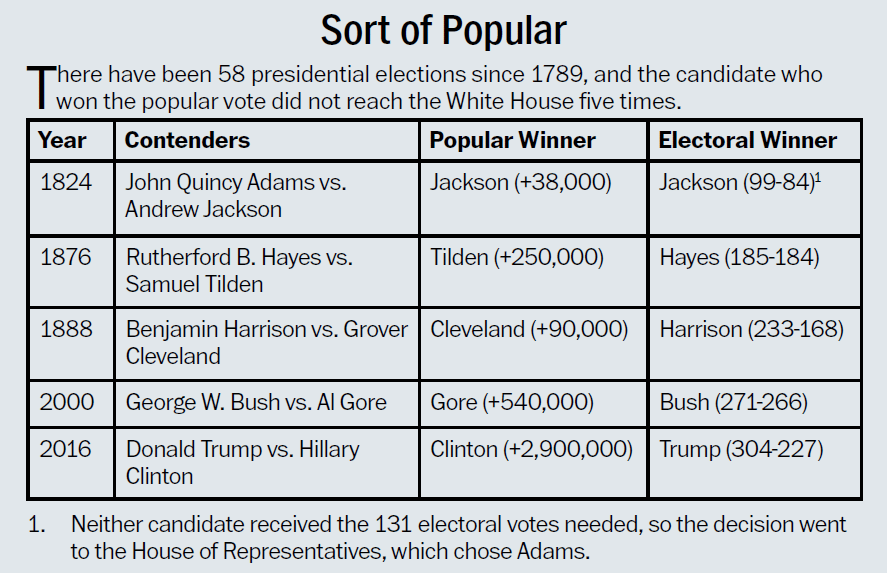 Instead of empowering rural states, the panel argued, the system empowers about 10 “battleground” states in which the polls predicting the popular vote are close enough to warrant candidates spend time and money there. That reduces the other 40 states to spectators.

“It’s not worth doing grassroots campaigning everywhere in the country,” said Hertzberg. “In New York state it doesn’t make sense to do a coffee klatch and invite your neighbors over and try to persuade them to vote for your candidate, because New York is a foregone conclusion [for the Democratic candidate].”

The Electoral College could only be dismantled with an amendment to the U.S. Constitution, which would require approval by two-thirds of both U.S. House and Senate members and the legislatures in three-quarters of the states. But there is an easier way, the panel noted. Since it’s up to legislators in each state to determine which candidate’s electors get sent to the Electoral College — it could be based on the state’s popular vote, the national vote, a coin flip or anything the legislators agree to — each state has the power to buck the system.

In response to this, legislators in many states have introduced bills to create a National Popular Vote Act, which would work as an interstate compact. Every state that passes the act would agree to send electors who represent the winner of the national popular vote, regardless of who won the electoral vote in that state.

To date, states that represent a total 165 electoral votes, including New York and New Jersey, have passed the act, and it is under consideration in five others. The goal is to have states on board that represent a total of more than the 270 electoral votes needed to win the presidency. However, election analyst Nate Silver has pointed out that no states that consistently vote Republican have adopted the plan, and a traditional swing state seems unlikely to agree to anything that would reduce its influence.

Zaino noted that if the act went into effect and a presidential candidate who won the electoral vote but not the popular vote was kept from office, he or she would almost certainly mount a legal challenge that would end up with the U.S. Supreme Court. But the panel agreed that for those who see a need for reform, the act may be the most effective way to enact change before the 2020 vote.

27 thoughts on “Did Your Vote Count?”