The martial arts, says Brad Teasdale, has taught him as much as the liberal arts. The Garrison resident has launched a six-part series at SkyBaby Yoga in Cold Spring called “Chivalry and the Martial Arts” that focuses on physical training as well as respect for one’s opponent. The classes are being given in tandem with two series of classes for teen girls and are offered on a pay-what-you-can basis. 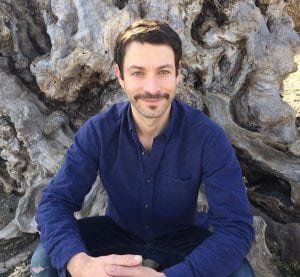 “I’m trying to root these martial principles within our own culture, in a meaningful context where chivalry is a code of honor, a place for self-discipline and respect,” explains Teasdale, who in 2005 received his third-degree black belt in Southern Black Tiger Kung Fu under Sifu Paul Koh. For the past 12 years, Teasdale has studied Northern Eagle Claw Kung Fu under Sifu Cecil Jordan and Grandmaster Leung Shum.

The series, Teasdale says, “introduces the code of ethics and the basics of martial arts that have been taught to young men throughout the ages. We’ll learn the ways of the classical heroes of myth and legend while practicing fundamental techniques of martial arts, including basic self-defense and stance training.”

“But the system is only as good as the practitioner. In times of peace we practice the martial arts in different ways. There’s a saying, ‘It’s better to be a warrior in the garden than a gardener at war.’ It’s about respect for oneself and for one’s opponent, and finding beauty in the struggle. The ideal way to defeat one’s opponent is through skill, and there’s a code of honor used in refining one’s skills.” 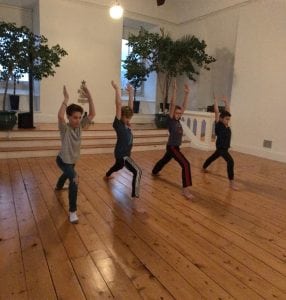 The classes begin with 20 minutes of a cardio warm-up accompanied by “teaching stories, ideas and philosophies — no lectures,” followed by 20 minutes of training that includes stances necessary for balance, strength and movement, and basic self-defense. The sessions conclude with 20 minutes of cool down, which Teasdale considers as important as warm-up.

Teasdale, who is the lead massage therapist and trainer for the Manhattan club Soho House, says he wants to give his pupils “a taste of what I call ‘living magic,’ which is like a live-wire energy, and maybe it will plant a seed. Hopefully some will wind up finding it more attractive than sitting and playing video games.”

Although the series began Jan. 19, participants are welcome to join through and including the Feb. 2 session. All sessions take place on Thursdays at 3:30 p.m. Sign-ups are done online at skybabyyoga.com and the cost is $30 to $120 for all the sessions. Yoga for teen girls takes place at 3:30 p.m. on Fridays and Pilates for teen girls at 6:30 p.m. on Sundays. Enrollment is ongoing for those classes. SkyBaby is located at 75 Main St., Cold Spring.