Jeff and Chris Toland have a lot in common, beginning with their birthday 58 years ago. “I’m three minutes older,” Chris boasts. But an incident from college reveals one of the most cherished aspects of the brothers’ shared lives: music.

In the late 1970s, while Jeff was attending SUNY Fredonia and Chris was at SUNY Potsdam, they returned home for the holidays and discovered that during the same week they had each independently purchased identical mahogany-colored Guild M-25 acoustic guitars. “When we brought our guitars out to show them off, we just looked at each other and said ‘What the hell?,’ ” Chris recalls.

Music had been a focal point for the brothers since childhood and now, after a lengthy sabbatical, they are again creating and performing together. They’re also living under the same roof in twin (but not identical) apartments in a three-story, turreted, early 19th-century home they are restoring on Schenck Avenue in Beacon.

“My dad taught me to play the ukulele when I was six and I was off to the races,” Chris recalls. Jeff took a different path, joining the chorus in grade school. “I was in all the plays and musicals,” he said. “But I was also playing guitar by ninth grade.“ 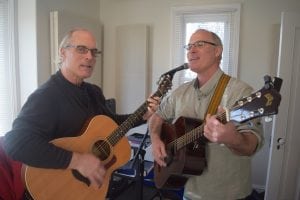 Chris and Jeff Toland in their Beacon studio (Photo by M. Turton)

During the 1980s and 1990s the Tolands played in a New York City band fronted by their older brother, Michael. That collaboration ended when Michael moved to California and Chris returned to Long Island, where the brothers grew up. “Somehow I became a contractor,” says Jeff, who owns Toland Construction in Philipstown, quickly adding, “but music is my passion.”

For Chris, music is his livelihood. With degrees in composition and teaching, he composes, produces and teaches. He attended the same high school as Mariah Carey and worked as a producer on her first album. He now advises aspiring musicians, offering guidance on everything from how to hire a lawyer to negotiating a record deal. He moved to Beacon to work with his brother on the home on Schenck, which will include a recording studio.

The Toland Brothers played in Cold Spring’s Summer Sunset Music Series last year and after an open-mic at the Towne Crier were invited to open there for the Cleverly Brothers. They are on the lookout for more local gigs.

According to Chris, their voices mirror each other as closely as their looks. “As twins, our voices are very similar,” he said. “And we’ve been harmonizing since we were eight years old.”

The brothers occasionally add a second layer of twinned harmonies to their performance — those of Jeff’s 17-year-old fraternal twin daughters, Laura and Tess Toland. “Their voices are completely aligned and so are ours,“ Jeff says of their four-part harmony. 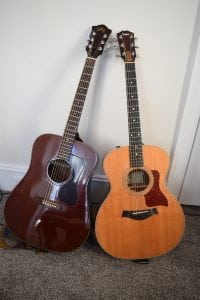 The harmony goes beyond vocals. The brothers say they have similar tastes in music, citing influences from Stevie Wonder and Steely Dan to Alan Holdsworth and Igor Stravinsky. “We work well together and are very aligned emotionally in writing lyrics,” Jeff says. While they write as a team, Chris handles the arrangements.

If there is one area where the brothers diverge it may be in how they view technology. Chris embraced it immediately; Jeff insists LPs provide better fidelity.

A CD with their original work should be ready by year-end. “This is an amazing opportunity with Chris moving to Beacon,” Jeff says. “It is a wonderful moment in time when we get to work together.”

One thought on “Twins in Tune”