Town Board comes to rescue by giving up 8 feet

Blame it on the Crown.

Using Dutch lanes made from Native American paths, the British government of New York in 1669 created a postal road from Manhattan to Albany. In 1703, the provincial Assembly turned the road into a “common general highway” and extended its right of way 33 feet from the center on both sides.

Early New Yorkers called it the Queen’s Road, after the reigning monarch, Anne. But as George I, George II and George III succeeded Anne and each other, the narrow highway with the wide right of way was recast as the King’s Road, used by mail carriers, travelers and armies in two wars. When the American Revolution ended royal rule, it became the Albany Post Road.

Though its name changed over the years, the 33-foot right of way didn’t — not even when New York State rejected some stretches of the road, including six miles in Philipstown, while incorporating others into Route 9.

Jurisdiction over the unwanted six-mile length devolved to the Town of Philipstown. Thus, the recent discovery that a historic building edged into the 313-year-old right of way became the town’s problem.

It came to light in October when Brett Waszkelewicz and Marissa Shapiro sought to buy a home at 848 Old Albany Post Road, in Garrison, from Robin and Thomas Whyatt, who had moved to Montana. The house includes a cottage wing, constructed around 1900 as a pump house for a water system on Saunders Farm but later converted to living space. The cottage-pump house extended into the right of way 6.5 feet and the Whyatts found that they could not conclude the sale until they settled the encroachment issue.

So they asked the town government to relinquish eight feet of right of way where the house intruded. 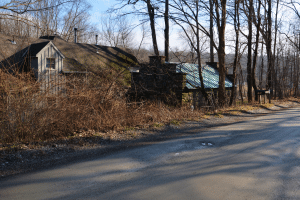 From Crown to Town to problem resolved: At 848 Old Albany Post Road, the stone wing of the house intruded onto a 1703 government right-of-way until the Philipstown Town Board “abandoned” an 8-foot strip of land. (Photo by L.S. Armstrong)

By law, the town government could have demanded removal of the offending part of the structure, according to Stephen Gaba, the town’s attorney. Instead, Carl Frisenda, Philipstown highway superintendent, and Ronald Gainer, consulting engineer, joined Gaba in reviewing options.

The situation simply involved “rectifying a problem that the town did not create,” Gaba told the Town Board in a Dec. 30 letter.

Nor did fixing it seem to adversely affect the town.

Frisenda noted in a Jan. 17 letter to the board that the land the Whyatts wanted was at least 13 feet from the shoulder “and apparently has never been used as roadway.”

Writing to the board the same day, Gainer said that relinquishing the piece “will not interfere with the use, repair and maintenance of Old Albany Post Road at present or in the foreseeable future.”

Gaba drafted a resolution allowing abandonment of the strip. But the Town Board could not adopt it without conducting a public hearing. When the hearing occurred, on Jan. 18, no one opposed the abandonment and the Town Board approved it. “We’re happy to do this,” Deputy Supervisor Nancy Montgomery said after the unanimous vote.

After enduring more than three centuries, a British colonial act was undone in minutes — at least as applied to eight feet around an interloping house.

“We’re thrilled!” Waszkelewicz and Shapiro said after the meeting.

Robin Whyatt said she and her husband, too, were pleased. “We thought we’d won the Revolution” and ended Crown domination years ago, she quipped.