Things got a little hairy in Beacon on Jan. 21 when many residents were taking part in women’s marches in Washington, D.C., New York City and Poughkeepsie and Beacon. For one thing, a maniacal beaver with an orange toupee and a scheming Russian bear tried to take over the town.

That was the plot of “Make the Forest Great Again,” a puppet show with a live band that was the highlight of a day-long event called Hey Neighbor at the Beacon Community Center.

It was organized by members of Club Draw, which takes place on the first Tuesday night of the month at Quinn’s. At the December meeting, Daniel Weise and other Beacon dads began talking about the presidential election, the need for people to reach outside their own social groups, and the realization that with their partners all signing up to attend a women’s march somewhere, they’d be solo parenting that day. 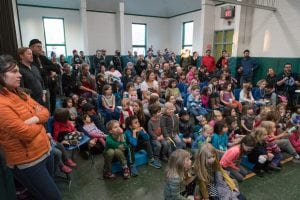 The fathers agreed it would be nice to do an event that day in Beacon that involved the children. “We all love doing fun stuff with our kids, and we knew most of our kids weren’t going to be going to the marches, especially the young ones,” Weise says. “So we thought we could do something community-oriented in Beacon, something the kids could help us with, and then they could feel like they were part of an event, as well.”

Children made signs to direct people inside the community center, created murals on sheets of brown craft paper and ran around in the unseasonably warm weather while staff from Barb’s Butchery grilled burgers. Weise says about 250 people showed up throughout the day.

“It was great to get to talk to some people who I’ve never had a chance to talk to, while my daughter fell asleep in my lap,” he says. “We think we know a lot of people in town. But we don’t know each other very well. Sometime we assume that everyone thinks the same way we do, so we rarely have actual conversations with each other. And then there are neighbors who think completely different than us that we might not know very well either.”

As for the puppet show, that came out of Club Draw as well. Matthew Chase had been wrestling with how one could respond to the election. After talking with other artists, a collaborative street theater performance began to take shape. 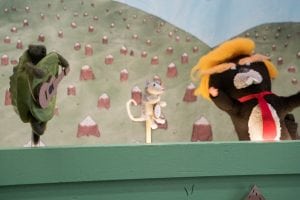 A turtle, a squirrel and a familiar beaver in ”Make The Forest Great Again” (Photo by Brian Doyle)

“What got me excited about street theater is that this community is full of so many creative, talented people,” said Chase. “As an individual artist it can be difficult to come up with a political piece of artwork that makes sense and feels like it’s enacting change and doing anything more than gratifying yourself. Street theater is a thing that’s open to everyone, and anyone can contribute as little or as much as they want.”

Chase teamed up with Benjamin Lybrand to create a puppet show that would appeal to children while also delivering a message. “We also did this as a way to have some catharsis,” said Lybrand. “I would have been very depressed in the days leading up to the inauguration if I hadn’t had this to look forward to.”

The show centered on a pair of forest animals who return home only to find  most of the trees have been chopped down by a tyrannical beaver and his helpers to build a dam to keep out animals from other forests. Only by working together to thwart the beaver’s plans — spoiler alert: an elephant saves the day — are the animals able to “make the forest great again.” 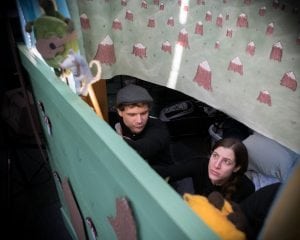 Although the elephant is layered with multiple layers of symbolism, it wasn’t a stand-in for the Republican party. Instead, it explains in the play, it came to the forest as a refugee because it was fleeing poachers.

“The elephant character is central to this Hey Neighbor idea and what could happen if we all get to know each other, across party lines,” says Chase. “But we had also been talking about the refugee crisis and what we could all accomplish together if we weren’t afraid of the ‘other.’ ”

An encore performance is planned for March, and Chase and Lybrand are say they are at work on a new show, “something with a lot of female protagonists,” says Chase. “We didn’t get to have a lot of female characters with this first one since almost all the women we knew were out of town marching.”