Gov. Andrew Cuomo wants New York’s county officials to figure out how to streamline government within their borders.

The governor revealed that priority and dozens of others in his draft state operating budget ($98 billion for fiscal year 2017-18) and elaborated on them daily, one by one, throughout January. 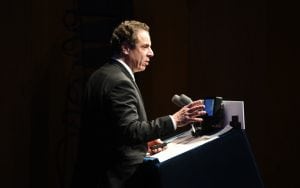 Gov. Cuomo delivers a State of the State address at SUNY Purchase on Jan. 10. (Photo by Kevin Coughlin/Office of the Governor)

Here are some proposals that would affect the Highlands:

The executives would have to submit their drafts by Aug. 1 to the county legislature, which would have 45 days to respond. If the legislature failed to do so, the plan would automatically go on the November ballot as a referendum. If voters rejected the plan, the process would begin again for the November 2018 ballot.

Cuomo’s administration warned that each county’s plan “must demonstrate real, recurring savings in costs, and not simply shift burdens to other taxpayers.”

The governor proposed eliminating tuition for students from middle-class families attending the State University of New York or City University of New York. Families or individuals earning up to $125,000 annually would be eligible. Students would have to be enrolled fulltime. The program would be phased in over three years and be available first to families earning less than $100,000. Cuomo estimated the program would cost $163 million annually when fully implemented.

Cuomo called for creation of an “enhanced middle-class child-care tax credit” to supplement the current credit. The governor’s office, which pegged the cost to the state as $42 million, said the move would more than double the benefit for families with earnings of $60,000 to $100,000. (Those with lower incomes already can participate in such a program.)

To fight corruption and encourage openness, Cuomo proposed nearly a dozen reforms, including:

Cuomo called for the creation, by 2020, of a 750-mile Empire State Trail for biking and hiking that stretches from the New York Harbor to the Canadian border. It would consist of new trails and links to existing networks such as the Hudson River Valley Greenway Trail System that includes the paths at Boscobel, Breakneck Ridge, North Redoubt, Arden Point and Little Stony Point, among other spots in the Hudson Highlands State Park; the Beacon shoreline, Madam Brett Park and Dennings Point; and the planned Hudson River Fjord Trail.

The governor urged that the state invest $2 billion in water and sewer projects, including: