My love affair with genealogy began as a child, paging through my grandmother’s photo album, getting to know relatives far away and long gone.

My paternal grandfather, Oscar B. Porter, was a photographer and his wife Emily was his colorist — she added flair to his black-and-white portraits. My grandmother also worked as a writer for the newspaper in Aroostook County, Maine.

It was there that she began researching her family tree. This was during the 1920s, when there were far fewer resources than we are blessed with today. After documenting five patriot ancestors, Emily became a charter member of the local Daughters of the American Revolution (DAR) chapter. My father later added to her work.

O.B. and Emily married in 1905, about the time another Oscar — Oskar T. Johansson — kissed his wife and children goodbye in Sweden to travel to the U.S. He worked his way across the country until he found a place that “felt like home”: Wyoming. My mother, their third daughter, was born and raised there. Before World War II she came to Washington, D.C. to work for the government and met my father. 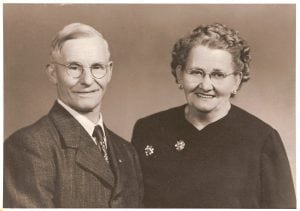 And that is how I came about. Have you ever wondered about the sheer improbability of any of us coming into existence in the families and bodies that we do? How many junctions and choices through the ages went into our parents being so placed to bring us into this world?

I grew up in Wyoming and Montana and came east to attend Barnard. I married and we moved to Dutchess County to raise our three sons. I got serious about my family history when I bought a computer with an internet connection and began adding to what my father and grandmother had collected. I joined our county genealogical society and picked queries from online message boards to research and learn. I found I had a flair for solving mysteries.

Thus it began. I managed to get a few part-time projects, but my dream became to leave my work in construction management to become a full-time genealogist. When the recession hit and my day job dried up, I gave it a go. Over the years I have built a steady clientele. For the most part, they are people who have gotten fairly far along on their own, usually back to the early 1800s, and hit what genealogists call a “brick wall.” 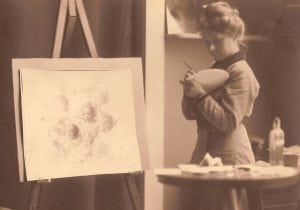 Emily Porter is shown “colorizing” a black-and-white photo around 1918.

Understanding the history of the area where your ancestors lived, whether Philipstown or Beacon or elsewhere, is critical to genealogical research. I live in Dover, which puts me with easy striking distance to many repositories. I regularly make day trips to the courthouses, libraries and archives of Putnam and Dutchess counties, as well as those in nearby counties, New York City, Massachusetts, Pennsylvania and Connecticut. You can’t find everything online.

Just as I have followed my grandmother and father in genealogy, I followed my father and grandfather into construction. While that trade involves predictable results with predictable deadlines, in genealogy you may be looking for a record that does not exist. Charging for time spent on a search that turns up few or no results was always difficult for me, although people are paying for your time. Still, I attempt to narrow the search to the most likely areas and tackle multiple projects in each repository so that at least one client will come out a winner for the day!

Dutchess and Putnam counties (the latter was detached from the former in 1812) are a patchwork of diverse ethnicities. As a result, I have worked on projects focused on Quakers, Palatines, freed slaves, Huguenots and Catholic Irish, among many other groups. There is never a dull moment. In addition, I recently became tribal secretary and genealogist for the Schaghticoke First Nations; in March I will discuss resources for researching Native American ancestors in our area.