Talk will focus on its influence on FDR 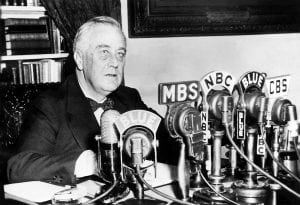 FDR in January 1944. “All that is within me cries out to go back to my home on the Hudson River,” he once said.

The free talk begins at 7 p.m. at the Sloop clubhouse adjacent to the Beacon train station. Maher will cover how Roosevelt’s experiences growing up on the banks of the Hudson River influenced his approach to the New Deal and the Civilian Conservation Corps. See beaconsloopclub.org.