A resident recalls life at the lake in the 1940s

In 1996, Alberta Areskog wrote about Lake Valhalla in the 1930s, “I guess everyone thinks their years were the best, but I know I had the best of Lake Valhalla.” In assembling the material for my book, Valhalla Highlands: The First Thirty Years, 1929-1958, I heard this same sentiment from everyone who spent time at the lake regardless of whether it was the 1930s, the 1980s or last year.

My childhood summers were during the 1940s, the decade shadowed by World War II. In spite of the War — in spite of it all — I think of my time at the Lake as golden years, just like everyone else. 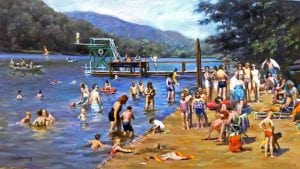 A composite portrait by Max Ginsburg of the beach at Lake Valhalla, modeled primarily on photos taken by Buddy Odland. The painting was commissioned by Joe Lombardi, who notes, “The beach was never that crowded.” For details about the photos, see end of story. (Image courtesy of Joe Lombardi)

Liz Berwind Gaffney speaks of the pleasant isolation in the early years brought about by gas rationing and the lack of automobiles during the week. On Fridays, the men would motor back from their work in the city to join their families for the weekend.

During the week, most of the community was bound to the community. Eggs, milk and butter were delivered by Jay, the Glenwood Farm milkman, bread and pastries by the Duggan’s (later Krug’s) bakery truck and farmer Ginotti and his sons brought fresh fruit and vegetables in an overflowing open truck. We would hike two miles down the main road to Herb Sara’s Country Store at Barrett Pond to buy whatever supplies had run out or just to watch, with awe, Herb drinking a full quart of fresh milk in one gulp.

Further weekday diversions included bingo and cartoons followed by movies at the Point (The Last of the Mohicans, Never Wave at a WAC, The Third Man, etc.). The weekends had the excitement of Saturday parties at the Point with smorgasbords, clam bakes, corn roasts, barbecues, soda, beer and dancing to Glenn Miller’s “Perfidia” and Artie Shaw’s “Begin the Beguine” surrounded by strung-up colored lights in the pavilion at the Point. The lack of communication with the “outside” and only minimum transportation lead to a summer camp-like atmosphere in those pre-television/pre-internet years.

Almost every summer an escape occurred from Matteawan, the Asylum for Insane Criminals in Beacon. We could hear the sirens from the other side of the mountain and the radio was filled with descriptions of the escapee’s terrible acts. Armed with BB guns, my cousin and I were ready to protect the women. A State Trooper would arrive advising us, if we saw the escapee, to run down the road to Sara’s Country Store to put in a call for help. Visions of running two miles down the dark country road being chased by a madman were hardly comforting, but they certainly added dramatic excitement.

Chores in the morning (accompanied by Arthur Godfrey on the radio), afternoons at the lake (or Monopoly on the porches on rainy days) and evenings fishing were the routine. 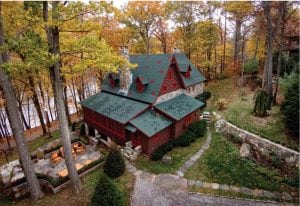 Every square inch of the forest was explored and the ancient footpaths traced. Hikes and overnight camping with Army equipment brought back from the war by fathers and uncles was a routine spiced by Mickey Spillane paperbacks and packs of cigarettes and the passed-around bottle secreted from our parents. Tee shirts, Woolrich Buffalo Check Wool Shirts, Blue Bell Wrangler jeans held up by Army garrison belts wrapped with Valhalla rattlesnake skins, a sheath on the belt for the requisite hunting knife, PF Flyers sneakers and bandannas were the outfits of choice. Hidden tree houses added to our independence.

The infrequent trips to Cold Spring were eagerly awaited. Meeting a train had the drama of seeing the great steam engines of the New York Central. I had my first professional haircut at the iconic Sam Sunday’s Barber Shop and Nat Glick in Glick’s Hardware Store and Hermy Glick in Glick’s Dry Goods were like friendly uncles.

Buying provisions for the week at the cavernous Grand Union on Main Street was followed by lunch (hamburger on white toast & apple pie were a must) at Burn’s luncheonette and Palen’s Drug Store provided the delectable homemade peach ice cream for the trip home. The privacy, compactness and isolation of the community created close and cherished bonds with our neighbors and friends. There was a very high degree of camaraderie among all, which happily continues.

Every year, as summer approaches, my thoughts revert back to the golden summers at the lake. For more than 85 years each generation has enjoyed the substantially unchanged natural and man-made beauty of Valhalla Highlands.

Who’s in the painting 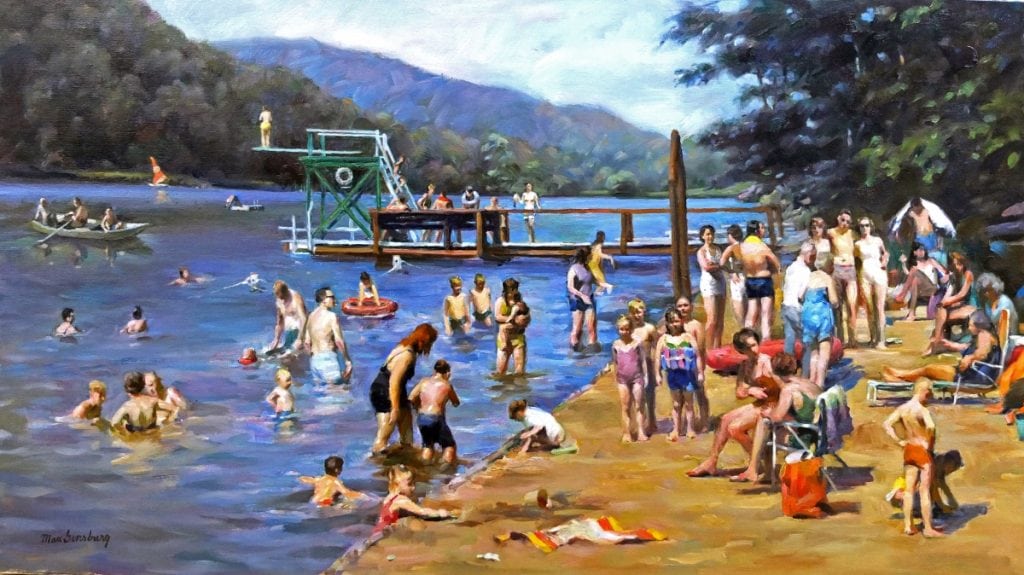