Activism isn’t always about marching or calling politicians. It can also be as simple as watching someone’s child.

Consider the initial meeting of the Hudson Valley Hate Free Zone that took place Jan. 14 at St. Luke’s Church in Beacon. More than 200 people showed up to be part of a network of individuals, institutions and businesses committed to protecting vulnerable communities. 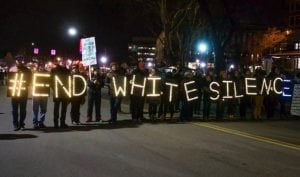 Although one of the groups that organized the meeting was the Beacon chapter of an organization called Showing Up for Racial Justice (SURJ), none of its members attended. Instead, they were elsewhere in the church, providing child care so that others could attend, in addition to providing snacks and art supplies for banner-making.

“Sometimes showing up for racial justice means stepping back so that others can lead,” said Sarah From, who with Ava Bynum formed the Beacon chapter of SURJ last year. A meeting on Jan. 31 at the Beacon Hebrew Alliance drew 78 people.

“The mission of SURJ is not only to be doing action, but also to be raising consciousness of white folks around race and to be building relationships within communities,” said Bynum. “The best actions come out of a community that knows each other and trusts each other.”

Members of the Beacon chapter have hit the streets over the past six months to raise funds for educational initiatives by the Hudson Valley chapter of Black Lives Matter. They also have protested outside local branches of banks that have investments in the Dakota Pipeline. SURJ acted after receiving requests from local chapters of BLM and #noDAPL. 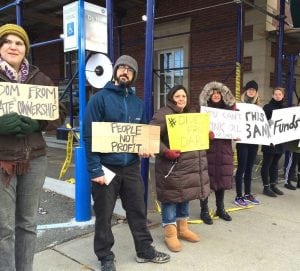 Members of the Beacon chapter of SURJ (Showing Up for Racial Justice) asking Chase Bank to defund the Dakota Access Pipeline. (Photos by Beacon SURJ)

Taking on a supportive role means that experienced organizers must “condition ourselves to not get in front of a camera unless it’s appropriate, not getting on the microphone, basically dismantling all those things that we may have already been trained to do,” Bynum said.

SURJ meetings allow time for both action and inner reflection. At the Jan. 31 meeting, smaller groups were formed for people who wanted to debrief about the women’s marches and immigration ban protests and what taking part taught them. There was also a group for those who wanted to learn how to disrupt racial or sexual harassment they encountered on the street.

Bynum and From are quick to point out that they created the chapter but are not in charge. As with Black Lives Matter and the Women’s March, there is not supposed to be any one in charge. Some observers have disparagingly referred to these groups as “leaderless movements,” but Bynum said she has a better — if wordier — description.

“It’s an intentionally creative leader-full movement,” she said. “As we’re organizing around racial justice, we’re trying to dismantle what racial oppression has created in our society, which includes having a very hierarchical system.” 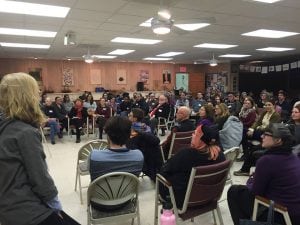 Instead of one leader, an organizing team leads various parts of each meeting. That includes training and workshops on topics ranging from nonviolent protesting to how to have discussions with family members and neighbors about race and politics. This type of activism is more challenging, she said, than when you’re part of a huge, anonymous crowd.

“In Beacon, we’re outside the bank protesting, waving everyone who drives by because we know all of them,” Bynum said. “Organizing in a small, close-knit community has shaped how we think about where our points of leverage are and how to call people in.” Disrupting business as usual or asking people to change their behavior does not occur in a vacuum, she said, but in the context of these relationships.

“There’s a real hunger in Beacon to plug into how to resist the parts of this [Trump] administration that people feel go against American values,” said From. “People are showing up and they’re not going away. It’s a different feeling now.”