Most hockey coaches would be happy to have their team score seven goals in a game. That was not the case for Mike Grean, whose Hendrick Hudson Sailors, bolstered by five starters from Haldane High School, fell to the Horace Greeley Quakers, 9-7, in a wildly undisciplined game at Ice Time in Newburgh on Jan. 28.

Haldane and the Montrose-based Hendrick Hudson have combined players for the past several seasons since neither school can ice a team on its own. 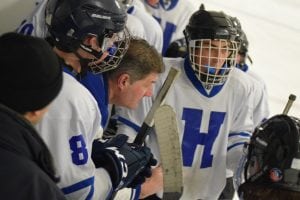 Mike Grean (center) with his players during a time-out. Five Haldane students play with the Hendrick Hudson Sailors, which is coached by Grean, a Cold Spring resident. (Photo by Michael Turton)

“It’s been a tough season,” said Grean, who lives in Cold Spring, of the team’s 4-13 record with three games remaining. The team is short on bench strength with barely more than two full lines. Last year’s roster had more than 20 players.

“We have to learn to control the puck better,” Grean said. “I continue to stress the basics, right down to receiving and giving a pass.” 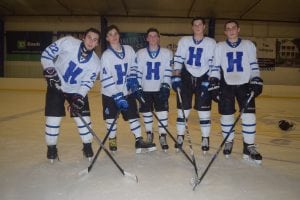 Even so, with a couple of wins the team could still make the playoffs, which begin in mid-February. Last year’s team finished 9-11-1 and in 2015 the Sailors advanced as far as the Section 1 semifinal for a 12-9-1 record.

Saturday’s game marked the fourth time this season that the Sailors have scored seven goals only to come up on the short. 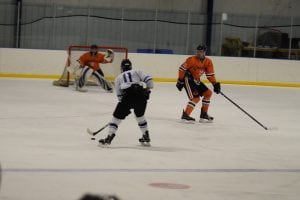 “You have to defend more,” said Grean, who has coached the team for 10 years. “We gave up a lot of odd-man rushes [when the attacking team outnumbers the defenders near the net], and we were always behind.”

The Sailors trailed throughout but managed to tie the score 7-7 well into the third period before two late Quaker goals.

Grean was asked to comment on the five Haldane players on his roster: 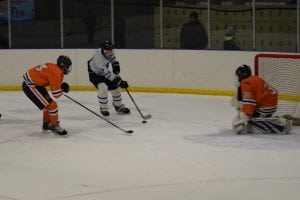 Captain Mike Harmancin (12) cuts to the net a split second before scoring.  (Photo by M. Turton)