Hannah Monteleone is a three-sport athlete at Haldane. The senior was named second team all-state in soccer and is a key piece of the Class C powerhouse girl’s basketball team, with softball still to come in the spring.

On the basketball court, Hannah is a confident, steady guard with long range and a quick release.

She is not unlike her three sisters. Her older sister, Allie Monteleone, is a sophomore standout for the Pace University basketball team. Her younger sisters, twins Livy and Bela, play for the varsity and junior varsity basketball teams, respectively. Like Allie and Hannah, they also play on the Haldane soccer team.

This fall, Hannah will join Allie at Pace. She signed a letter of intent on Feb. 3 to play soccer for the Setters. 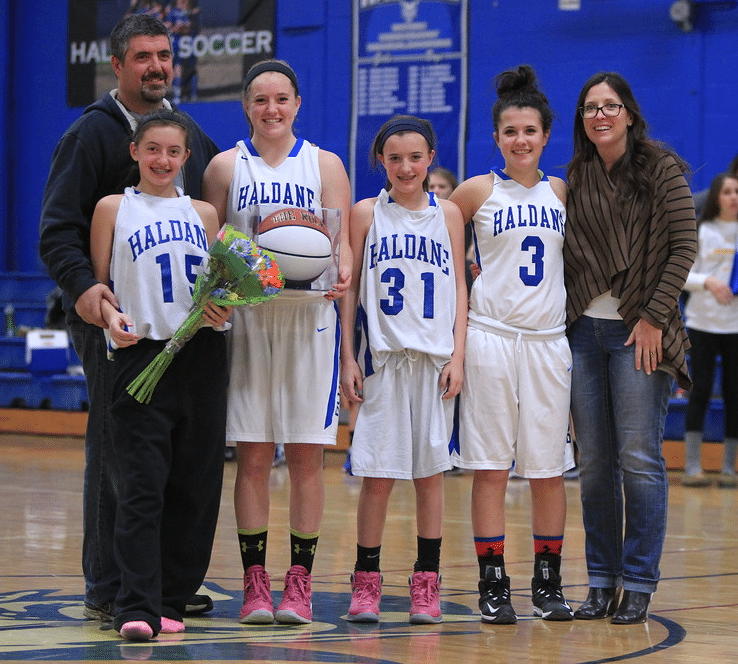 Livy, Allie, Bela and Hannah Monteleone are flanked by their parents Michael and Siobhan at Senior Night after a Haldane basketball game in 2015. (Photo by Steve Schweikhart)

“Playing with my sisters is fun, but different,” Hannah said. “Playing with Allie, I was the one being corrected or getting helped out. When I needed her, she always had my back. Allie made me feel like she was my biggest fan. Now, playing with Bela and Liv, I have to fill Allie’s role in helping them out and being supportive.”

The girls’ athleticism runs in the family. Their parents were high school athletes and their father, Michael, played baseball in college and in the Houston Astros farm system. Allie Monteleone gravitated to sports at a young age and Hannah quickly followed.

“Michael loved being outside with the girls playing any sport they wanted,” said their mother, Siobhan. “It didn’t matter what time it was, the girls would ask their daddy to play soccer, have a catch or shoot-a-round and he was the first out the door.”

Siobhan described the important role that Haldane played in her daughter’s success. “My girls started following sports in elementary school and it was neat for them to see star athletes in the hallway,” she said. “They couldn’t wait to grow up and be just like them.” 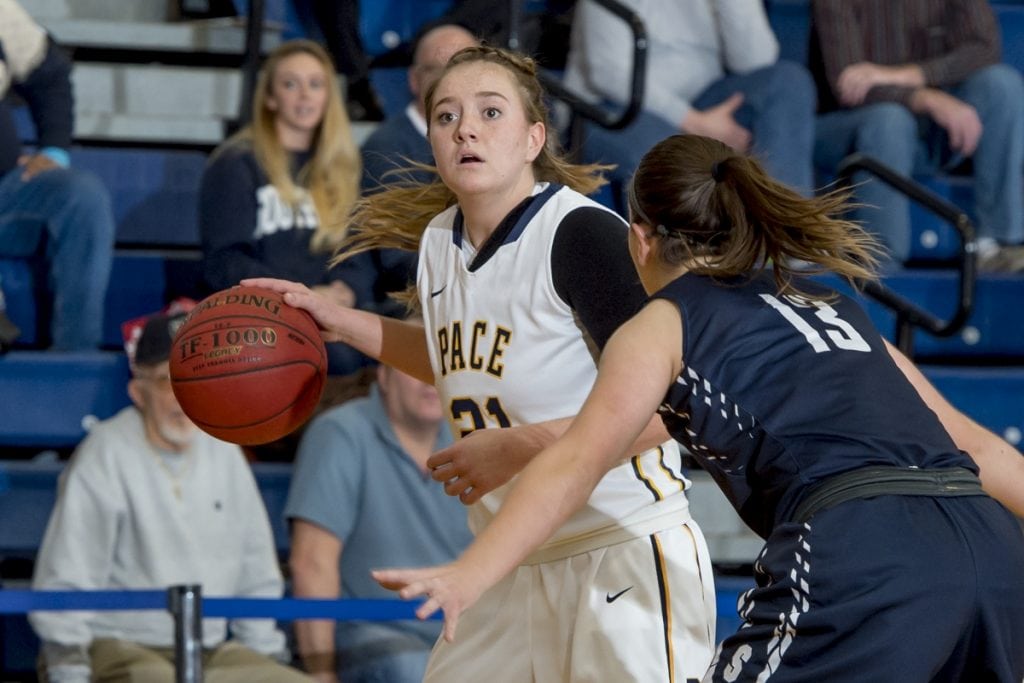 Allie Monteleone, a sophomore guard for Pace, scored a career-high 23 points on 60 percent shooting on Jan. 14 in the Setters’ 69-66 victory over Stonehill. (Photo by Stockton Photos)

With four athletes in the house, it is difficult to contain the competitiveness to the playing field, she said. Whenever the girls are playing in the backyard, “it usually ends up with someone being really mad.”

Hannah said having a competitive athlete as an older sister was an advantage.

“When I was younger, I watched Allie play all her sports and it motivated me to be as good as her,” she said. “Allie didn’t take it easy on me. Since I could catch a ball she was throwing fastballs at me, or if we were playing H-O-R-S-E on the basketball court, she would start shooting 30-footers. I had to practice to beat her!”

Likewise, Bela and Livy said they feel Hannah’s influence on them. She praises her sisters as Allie did her but isn’t shy about offering advice.

Hannah and Allie were on the Haldane soccer team that won the Class C state title in 2014, so she was disappointed this year when the Blue Devils fell in the regional final. After winning a state title as a sophomore, that became her goal in all three sports, she said.

It’s been a great run, she said. “I have had great coaches and I will miss playing with everyone at Haldane — I have been playing with them since kindergarten!”