When Nora Olsen first considered writing a novel for teenagers, she planned to include gay characters. She read other books in the genre and found that the few with LGBTQ protagonists were generally “problem novels” in which the character’s sexuality or gender identity was the pivotal part of the plot. If they weren’t the protagonist, they were the wisecracking sidekick.

Olsen had something else in mind. “I very consciously wanted to write an adventure story with LGBTQ teenagers as heroes,” she says. “The ‘problem’ [of their identity] could be part of the story, but my goal was for these readers to come to see themselves as ‘I can be the hero.’ ” In the resulting novel, The End, published in 2010, time-traveling teens must, as a result of a nuclear disaster, go back in time to alter its course. 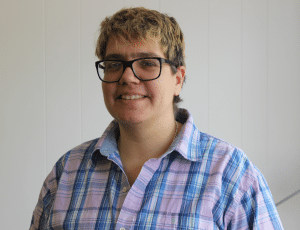 Nora Olsen (photo by A. Rooney)

Olsen, who lives in Beacon, has since written three more young-adult novels, and is at work on another two. Dystopia in  one form or another is part of all of Olsen’s work. “Teenagers live in a dystopia, regardless of their own personal situation,” she explains. “They’re hard done by, and they often have no control over things.”

Although she wasn’t initially drawn to the young-adult genre, Olsen found that her short stories for an adult audience were frequently rejected because her protagonists were teenagers. She was further encouraged to shift to the genre after a study by author Malinda Lo, who calculated that fewer than 1 percent of the young-adult novels published each year have main characters who are LBGTQ (lesbian, bisexual, gay, transgender or queer).

Olsen, who is gay, says she appreciates straight authors who include gay characters. “Writers have to write about the world they live in,” she says. “It can be well done or poorly done. When I write straight characters I try to avoid tropes. Often the first impulse is not a good impulse. You want to be aware of not lazily repeating the same old story.”

When attempting to write her second novel, Olsen tried to come up with a lesbian novel that was marketable. “So I came up with clones!” she explains. Swans and Klons is “straight-up sci-fi set in a future world with no more men, only women, and everyone’s a clone. It starts out as a utopia but there’s a horrible secret.”

In her third book, Maxine Wore Black, Olsen took on a reinvention of Daphne DuMaurier’s gothic classic, Rebecca, long a favorite. “I love that book and have read it so many times; such a wonderful plot,” she says. “I thought it was ripe for retelling. I always used to think that [the primary male character] Maxim was so dreamy, but I came to realize that he’s completely not! He is not a good catch.” She changed the setting to contemporary New York City, Maxim became Maxine, and all the other characters underwent similar transformations.

Olsen says her personal favorite of her books is Frenemy of the People, published in 2014. She wanted to “write the simplest story I could, and dial it down.” The writer chose “the oldest story in the world: two people who can’t stand each other, and then fall in love. It’s a contemporary love story which also kind of digs into the way the mortgage crisis is a backdrop to our regular lives, forcing families to move.”

Frenemy required Olsen to research a number of topics she didn’t know much about, including homecoming festivities, horseback riding and driving a bulldozer.

Several of her books are set in the Hudson Valley. Olsen, who grew up in Manhattan and graduated from Brown, moved to Wassaic about 10 years ago with her wife, Áine Ní Cheallaigh, but they found it too rural after having spent the previous six years in Brooklyn. They discovered Beacon after seeing it on a Metro-North timetable.

Olsen’s books, which are published by small presses, are sold through the usual online channels and stocked by independent booksellers such as Beacon’s Binnacle Books, where she has done a reading. Olsen says teens rarely attend these events, however. They tend to rely more on online sharing of reviews and blogging, replete with no-holds-barred critiques, which Olsen takes to heart.

“I take criticism very seriously and learn from it,” she says. “Of course, sometimes I disagree with it, too.”

Olsen has a blog at noraolsen.com and also writes about books at booklikes.com. And she has a bagel. Several years ago a contest offered the coveted prize of naming a Beacon Bagel sandwich and coming up with its ingredients. Olsen won and promptly used the opportunity to market her novel, The End.

“That’s when I felt I had made my mark in the community,” she says, although she confesses she never orders The End bagel because she no longer eats eggs or cheese. But it’s still on the board.