Newly compiled statistics show that reports of serious crimes in Beacon fell to their lowest level in five years, and are now 25 percent lower than in 2012.

Beacon officers in 2016 responded to 280 reports of what the department classifies as major offenses — rape, robbery, aggravated assault, burglary, larceny and auto theft — compared to 300 calls in 2015 and 408 in 2012. For the most part, aside from a modest bump from 2014 to 2015, the numbers have been steadily trending down since Chief Douglas Solomon was hired in 2012. 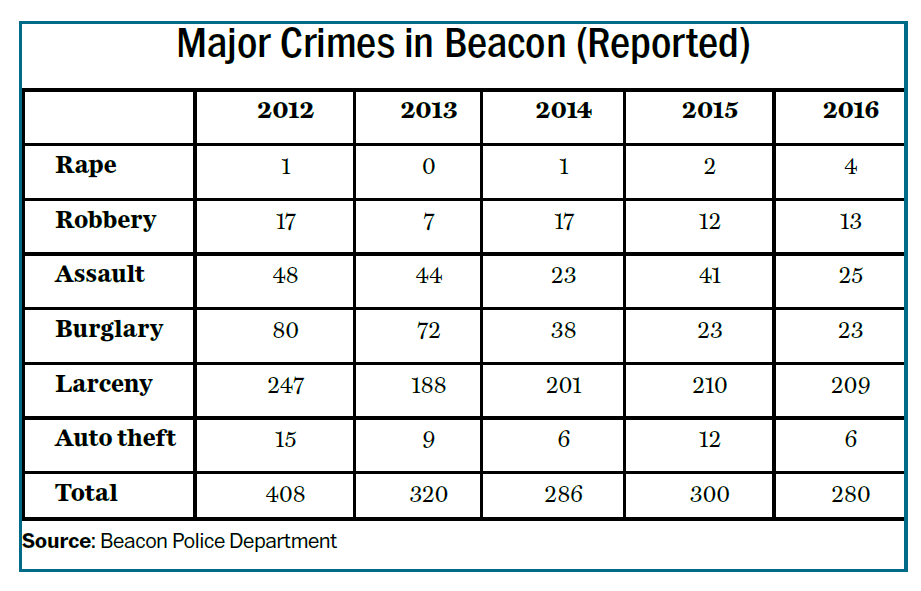 Solomon noted that arrests were up in 2016, with 834 versus 761 in 2015, while reported crime is down. “That means the officers are being more proactive,” he said. “What you want to see are the numbers we have.”

Of the 280 major crimes reported in Beacon last year, the great majority were larcenies — the intentional but many times petty theft of an item belonging to another person. The number of robberies (the forcible taking of another’s property) and burglary (the unlawful entering of a dwelling) were far fewer and held steady from a year ago.

Automobile theft fell by half and aggravated assaults (an attempt to cause serious bodily harm) dropped significantly, as well. The number of reported rapes doubled, from two to four.

The investigation of Beacon’s lone 2016 homicide — the city’s first in nearly a decade — remains open. Solomon said that despite following up on several leads, no arrests have been made after a 25-year-old man visiting Beacon was shot to death in August at the Davies South Terrace apartment complex.

The 2016 figures, which will be published in the city’s annual report in May, don’t track calls involving illegal drugs, although Solomon acknowledged heroin and cocaine activity in Beacon. He said the addition of a Beacon officer to the Dutchess County Drug Task Force paid dividends within a few weeks with an arrest and the recovery of narcotics.

Solomon, who often says that police can only take credit for a drop in crime if they’re willing to take the blame if it rises, said it was difficult to attribute the statistics to any single factor. He said he has been pleased with the department’s move to sector policing, in which officers patrol within a certain section of the city, as well as increased foot patrols on Main Street.

“I’m happy to say we have a handle on things,” he said. “When you’re deploying your resources more efficiently, that plays into it also.”