On the road to eco-friendly electricity aggregation programs, Highlands communities may be accompanied by an unexpected passenger — payments to the owners of three upstate nuclear power plants facing uncertain futures under New York State’s clean-energy plan.

Launched by Gov. Andrew Cuomo in 2016, the plan calls for 50 percent of the state’s energy to come from renewable sources, such as wind and solar, by 2030. While that goal is pursued, it calls for a $2 surcharge on monthly electric bills to keep aging nuclear plants running — for now. The surcharge, approved last year by the state Public Service Commission, which regulates utilities, is expected to continue until at least 2029 and provide the owners of the upstate plants from $7 to $10 billion in subsidies. (The owner of Indian Point, which is scheduled to close in 2021, will not receive subsidies.)

Citing those costs and problems caused by nuclear energy, the Beacon-based Hudson River Sloop Clearwater organization in November filed a lawsuit in state court in Albany challenging the surcharge. It expanded the case in January when municipal and consumer interests joined in, including 52 individuals who already pay for 100 percent renewable energy. 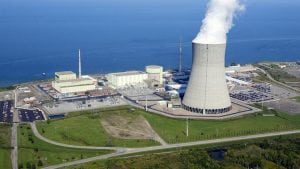 The challenge to the subsidy comes as Highlands governments move toward participation in a Community Choice Aggregation district. CCAs allow municipalities to bargain on behalf of homeowners and small businesses for less expensive and/or more energy-efficient electricity, especially from renewable sources.

A citizens’ group, Renewable Highlands, has presented the idea to five Highlands communities. Beacon agreed on Jan. 17 to join a CCA and the Town of Fishkill did likewise on Feb. 1. The Town of Philipstown board held a public hearing on Feb. 8 and was expected to vote at its next meeting.

“I don’t see any downside” to joining, Supervisor Richard Shea said in opening the hearing, which drew a near-capacity audience.

Board member John Van Tassel noted that even if the town decides to join, “it doesn’t affect anybody who doesn’t want to be part of it,” since individual residents can opt out. 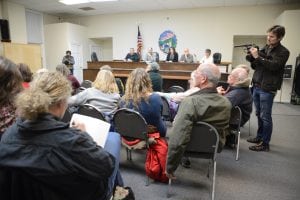 A camera crew from The Years Project, a documentary television series, filmed the Philipstown public hearing on CCA participation. (Photo by L.S. Armstrong)

No one expressed opposition to the idea. “If we all get together and support something that’s this positive and makes a big difference in where we’re getting our energy and in greenhouse gases, why not?” asked Eliza Starbuck, a resident of Cold Spring. Other supporters included three children. “Electricity should be cheap but also be helping the environment,” said Aidan Sullivan-Hoch of Garrison, who is a sixth-grader at the Manitou School. He described the potential for climate change to inundate much of Florida. “If we could do something to stop that, it would be really good.”

Jason Angell, a Renewable Highlands representative, cautioned that there’s no guarantee that a CCA can save money while also providing energy from 100 percent renewable sources. In Westchester County towns that joined a CCA there found that electricity from renewable sources can cost more than “non-green” power. 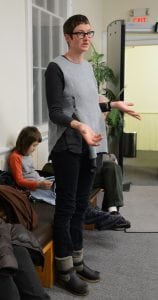 And that’s one reason the town of North Salem, in Westchester, joined the Clearwater suit. The town purchases 100 percent renewable energy for its facilities and 80 percent of residents also went that route, despite the higher cost. Under the surcharge, Clearwater argued, North Salem residents and small businesses would subsidize nuclear power when they already pay for all the energy they need.

The PSC said after North Salem joined the suit that it will consider not imposing the surcharge on municipalities and consumers that rely on renewable energy.

Manna Jo Greene, Clearwater’s environmental director, said in a statement that the subsidy would take funds that could be spent on renewables and efficiency to reach the clean-energy plan’s 2030 goal and instead devote them to the “bailout of aging, unprofitable and dangerous nuclear plants, which will continue to generate highly radioactive nuclear waste for which there is no safe storage.”

In response, the PSC cited experts who argue that immediately shutting down the nuclear power plants in Oswego and Wayne counties would increase carbon emissions in the state by more than 31 million metric tons over two years and lead to public health and societal costs of at least $1.4 billion because the state would need to rely on coal and oil or construct gas plants. The nuclear plants are also major upstate employers.

Following Philipstown’s public hearing, Shea said he was not familiar with the details of the Clearwater lawsuit. But he suggested the surcharge might be worth saving jobs in the short-term while also protecting the environment in the long-term.

Court proceedings in the Clearwater case are scheduled to begin April 7.