Like the Hudson River, every so often the Brooklyn-to-Highlands pipeline flows the other way. Max Mueller, a city resident who grew up in Cold Spring and graduated from Haldane High School in 2010, is among three photographers whose work will be displayed in Earth, Water and Wood, an exhibition at the Bannerman Island Gallery in Beacon that opens on Second Saturday, Feb. 11, with a reception from 4 to 6 p.m.

The terrain and beauty of the Highlands is the source of inspiration for all three artists — the others are wood sculptor Sheldon Stowe of Cornwall and photographer Brian Wolfe of New Windsor — but the familiar landscapes are not immediately visible in Mueller’s work. The photographer, who frequently examined molecular and crystalline structures while studying neuroscience at Bard College, uses his camera like a microscope, revealing miniature landscapes that call to mind greater ones. 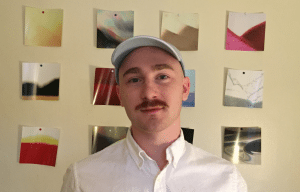 Mueller says he was on the subway when the technique came to him. By zooming in on a portion of an image he had taken, he could transform city scenes and inhabitants into vistas. While walking around New York, Mueller snaps photos with his iPhone, looking for inspiration. In one instance he focused his camera on a person passing the side of a building; in another it was the sleeve of a diner at a café.

Mueller studies each image, and, if he sees something pertinent, zooms in to create a new portrait. The titles of his photographs include a reference to the larger image to help viewers make a visual connection.

He says his work reflects an interest in evolutionary aesthetics, which he describes as “why we humans find certain forms of things attractive. Why is it that people find a particular mountain range or valley to be pleasing and, why, in terms of visual art, are so many people often drawn to landscapes?” 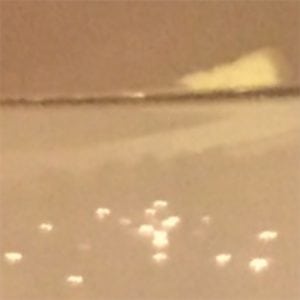 Constitution Swim, taken from an image of a Zoijrushi cooker

Mueller believes one reason is that the scenes reflect favorable conditions, such as a fertile valley with the clean water and bountiful food necessary for humans to thrive. These conditions may not be depicted in the painting, but subliminally they can influence perception and attraction.

“My understanding is that the omnipresence of mountain and river forms is due to the thermodynamic flow systems governing, well, everything, from landscapes to us to our made objects,” he explains. “It’s not a quantitative field, but it pushed me in the direction of what I wanted to study.”

Mueller’s thesis at Bard focused on the behavior of larval fish, or, as he puts it, “the study of small things.” What Mueller didn’t study much was art. The son of artists (his father is a screen printer and art teacher, his mother a painter and interior designer), he wanted to forge his own path. He pursued science and also music. It’s only in the past 18 months that he turned to photography. 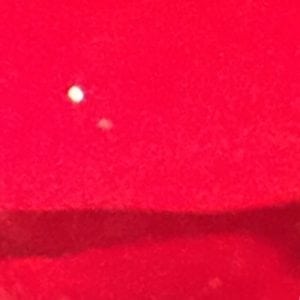 Estuary View, taken from an image of a table at a French restaurant

“I’m a late bloomer, visually,” he says. “My only foray into visual art was the graphic design of logos, icons and user interfaces for the software I develop. Recently music and photo have mingled; I’ve been using some of these ‘zooms’ as album art.”

As a musician, Mueller has scored commercials for clients that include Google and Vitamin Water. He has been posting his compositions online for years, and says they slowly have been discovered by record companies and agents. “I encourage people to keep putting stuff up — you never know who will listen to it,” he says.

While Mueller says he enjoys the city — he works there as a research manager for a media company — he much prefers the terrain of the Highlands. “In my own little way, I am working to restore the landscape of the place I would like to be in, in a place outside of it,” he says.

The Bannerman Island Gallery, located at 150 Main St. in Beacon, is open from noon to 5 p.m. Saturday and Sunday and weekday afternoons by chance or by appointment (call 845-416-8342). Earth, Water and Wood continues through March 5.