Recent confusion over whether the speed limit on Cold Spring streets should be 30 mph per state law has been resolved (it is), but reducing it to the 15 mph stated on a number of signs will take time.

“We all agree 30 mph is ridiculous and dangerous to pedestrians, children and drivers,” but it is clearly mandated by state law, Mayor Dave Merandy said at a Jan. 31 public hearing to consider changes to the Vehicles and Traffic section of the village code. 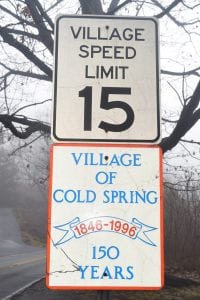 Several residents submitted correspondence while others spoke against what they believed was a move by the village board to raise the speed limit from 15 to 30 mph. In reality, Merandy said, the board was proposing an update to align the limit with state law — a law for which no one in Cold Spring has expressed support.

Several 15 mph signs along village streets have compounded the confusion. Deputy Mayor Marie Early said that a previous village board amended the village code, with the blessing of the village attorney, to lower the speed limit to 15 mph. But state law takes precedence, so the lower speed limit cannot be enforced. School zones are one of few exceptions where the state-imposed 30 mph limit can be reduced by the village.

Trustee Fran Murphy said that previous boards had asked the state seven times to allow the village to lower the speed limit but received no response.

The board will seek assistance from state Assemblywoman Sandy Galef and Senator Sue Serino to petition for a reduced speed limit. Merandy said the effort should include a street-by-street assessment. Some residents suggested Cold Spring join with nearby villages that face a similar situation.

The mayor said the village could erect yellow, diamond-shaped signs to “suggest” slower speeds. They are common on state highways, particularly on turns, although they are not enforceable. It was noted that the village can legally leave the 15 mph signs in place.

The public hearing was closed at the Feb. 7 meeting, after which the trustees approved a number of minor updates to the code related to parking.

President Matt Steltz and Chief Steve Smith were part of a delegation from the Cold Spring Fire Company that attended the Feb. 7 meeting to clarify issues that Steltz said may have been “lost in translation.”

Money was at the heart the discussion. The village has been slow to pay $17,039 it owes the fire company, Steltz said, which is needed for gear, fire hoses and air bottles. The CSFC president also noted that the company’s 2017 request for village funds was the same as last year. 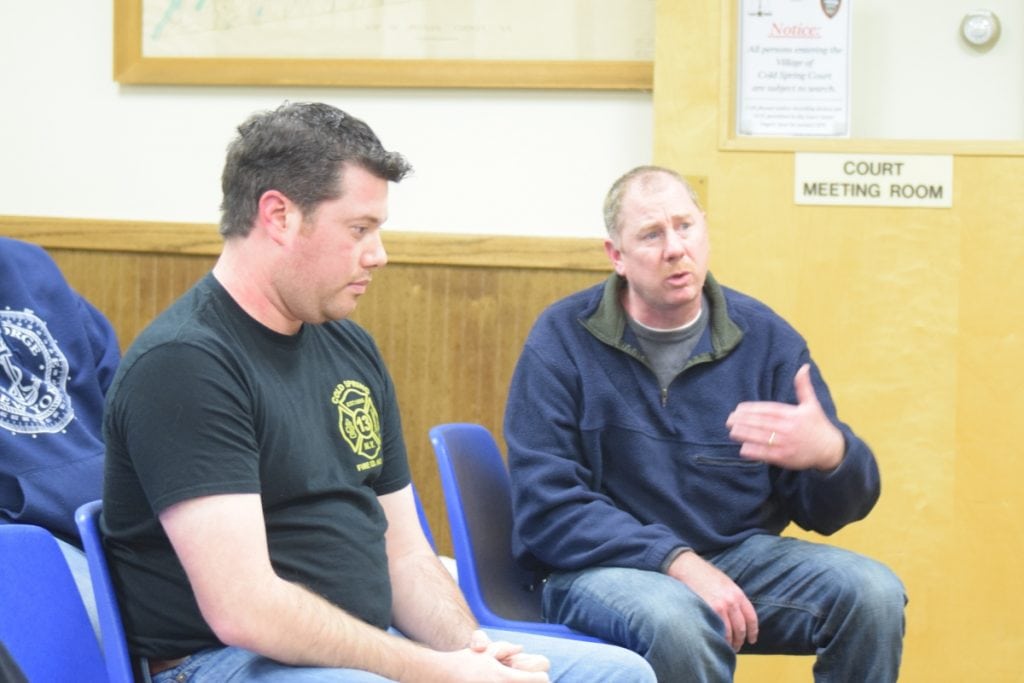 The reason for the delay lies in part with Nelsonville, which purchases its fire protection from the village, which in turn passes on that revenue to the fire company minus administrative expenses. Last October, Cold Spring billed Nelsonville $21,679.39 for 2017 fire protection as part of a contract that included the first rate increase since 2012. Nelsonville responded with a check for $20,674.95 on Jan 23. As a result of the discrepancy between the amount billed and the amount paid, the check was not cashed right away.

“Nelsonville didn’t budget for the increase,” Deputy Mayor Marie Early explained, but that didn’t sit well with the CSFC delegation. “The fact that you have a problem with Nelsonville is not our problem,” said former Cold Spring mayor and current CSFC Vice President Ralph Falloon.

“Nelsonville didn’t budget for the increase,” Deputy Mayor Marie Early said. The explanation didn’t sit well with the CSFC delegation. “The fact that you have a problem with Nelsonville is not our problem,” commented former Cold Spring mayor and current CSFC vice president Ralph Falloon. “You do have our money,” Steltz added.

Throughout the discussion Early expressed doubt about the village’s ability to pay the money owed CSFC immediately. “Here’s the problem,” she said. “Do we pay you or do we pay LOSAP?” referring to the premium the village pays into the Length of Service Award Program, the volunteer firefighters’ pension fund. John Landolfi, a veteran firefighter and former CSFC president, responded, “You can’t not pay LOSAP!”

If Early had her doubts, Merandy was emphatic, “We will pay it… I will take care of it tomorrow,” he said. In an email to The Current on Feb. 8, village clerk Mary Saari indicated that a check for $17,039 would be sent to the fire company next week.

The poor condition of the firehouse prompted another discussion. Falloon said many problems identified in 2008 are still unresolved, including a badly decaying roof and the need for a new HVAC system. But Merandy questioned the wisdom of pouring money into the building, which is owned by the village, and encouraged CSFC to revisit plans for a new firehouse. He cautioned the company, however, to be “realistic” in coming up with a proposal that the community could support, that is,  well below past estimates in the $5 million to $8 million range.

10 thoughts on “Village May Petition for Lower Speed Limit”