As his students settled in, Joseph Linksman opened with a question.

“Did anybody leave the last class feeling confused?” he asked. A few students glanced at each other sheepishly.

“Don’t lie to me,” Linksman said. “I left the last class feeling confused.”

“OK, a little,” admitted one student.

“Remember, this is an introductory class,” Linksman replied. “You’re not going to understand all of this; you might not master any of this. As long as you leave class with more thoughts than you came in with, we’re all good.”

If that seems like a remarkably permissible attitude for a teacher, keep in mind that Linksman’s class, Introduction to Law, covers almost everything that’s taught during the first year of law school. But Linksman’s students aren’t in law school. They’re children and teenagers who meet once a week at the Rivertown Homeschoolers Hub in Beacon, and some of them are as young as 10.

“The overarching theme for the class is that law exists, it’s a very real thing that affects your life, and you have to play be these rules or deal with the consequences,” Linksman said before class. “If we’re going to have public education in which we prepare our young people to be good citizens, the material that’s covered in the first year of law school is essential.”

Linksman says he envisioned the class being for high school seniors at public schools. That changed when he met Rebekah Azzarelli, who helps organize the Rivertown Hub that began last year when she and Jessica Simkovic were each looking for a way to have their children connect with other homeschoolers and learn from professional teachers without having to drive them to the nearest hubs in Danbury or New Paltz.

All homeschool parents “travel a lot to find cool stuff,” Azzarelli explained. “But Beacon is so full of amazing resources, I felt like we could do something sustainable here.” 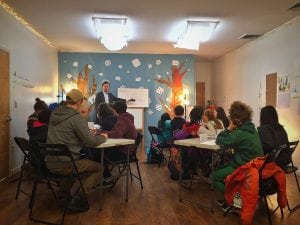 Joseph Linksman and his Introduction to Law students at the Rivertown Homeschoolers Hub in Beacon (Photo by B. Cronin)

The hub meets at Compass Arts at 395 Main St. on Tuesdays for ages 5 to 9 and Wednesdays for ages 10 to 18. Classes range from art to science to philosophy. “My daughter calls the philosophy class ‘How to Debate Kindly,’ ” said Azzarelli.

Linksman and Azzarelli met last summer while helping to plan a Unity in the Community barbecue. When Linksman learned Azzarelli was involved in a homeschooling hub, he mentioned his idea for a law class. Linksman had never taught before, which Azzarelli found surprising the first time she peeked in on a class. “He’s a natural teacher,” she said. Linksman said there’s been enough interest from parents that he’s considering a drop-in course for adults.

The mix of grade-school and high-school students haven’t been phased by the difficulty of the material, Linksman said. “They’re moving at warp speed,” he said. “They’re so sharp and well read.”

That view was borne out in class when Linksman told the students he’ll be talking about the election of 1796.

“That was between John Adams and Thomas Jefferson, and Adams barely won,” one student interjected.

“Whoa, spoiler alert!” said Linksman. “I was going to draw that out a little.”

Before class Linksman said he hoped the students would recognize the parallels between the history of constitutional law and current events, parallels that become clear when he brought up the Alien and Sedition acts of 1798.

“With the Alien and Sedition acts, we ruled that we can kick immigrants right out, yelling at them to go back to where they came from,” he told the class. “We also stopped immigration from certain countries. Does this sound familiar?”

A dozen hands shot up.

Even when dealing with subjects as complicated as the Marbury v. Madison case of 1803, which formed the foundation for judicial review, he said there is always at least one salient point that everyone, no matter the age, takes to heart.

“You think everyone in government argues and fights like idiots today?” Linksman asked his students, after recounting the squabbles between Adams, Jefferson, James Madison and William Marbury that led to the case. “This has been going on for our entire history.”