During the winter, an exciting high school basketball game in a warm gym could be a refuge, where an appreciation for sport, sportsmanship and teamwork converge. It’s a good feeling that lasts only until noisy and abusive parents and other adult fans go after the refs.

Screaming at the officials seems like a longtime American pastime. “Are you blind?” “Call it on both ends!” “You suck, ref!” But at the high school level, it causes concern among athletic directors, coaches and many parents in large part because students often emulate the behavior and disrespect they see exhibited by adults. 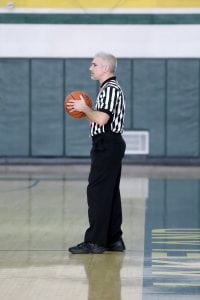 Sports officiating can be a lonely job. (Photo by Richard Kuperberg Sr.)

It also discourages many referees from continuing in what is typically a part-time profession, or even getting into the game, causing shortages in many places that forces athletic directors to cancel games or take more drastic action, such as not offering junior varsity sports.

Haldane’s athletic director, Chris Salumn, believes a trend toward early specialization contributes to the abuse he’s heard from the stands at various schools. Students no longer play two or three sports casually but focus intensely on one sport year-round.

“More parents are spending money and the pressure has increased,” said Salumn. “Parents are more outspoken because they believe there is more at stake with opportunities for scholarships.”

A referee who has officiated games in Westchester and Putnam counties for 10 years and asked not to be identified echoed that judgment.  “Today’s parents intensify the atmosphere,” he said. “They bring this pressure of the money they have spent in the sport to the gym. There is an unrealistic push for the sport to carry kids to college.”

The scrutiny and judgment are spread evenly among all stakeholders: players, coaches and officials. But often the criticism of coaches are kept to a murmur or saved for the ride home and the dinner table.

Instead, it is the officials who become the target of this anxiety from the jump ball to the final whistle. In many games, verbal barbs, insults and criticism rain  down on the court, especially in smaller gyms with sparse crowds. “What are you looking at?” “Someone is going to get hurt.” “You’re horrible, ref.”

“Officiating is a difficult part-time job for most who do it,” said Salumn. “They need to leave their full-time job at 3 p.m. to get to the game, where they are scrutinized and judged the entire time. It’s a no-win job that is missing the respect it deserves.” 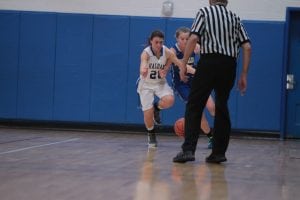 An official watches a scramble for a loose ball during the Haldane vs. Putnam Valley game on Dec. 18 (Photo by Richard Kuperberg Jr.)

Scott Timpano, who coaches the Beacon boys’ varsity basketball team, said that “the overall atmosphere of the games makes it very challenging for them. Coaches push the officials to make the right calls, players are constantly positioning for foul calls and then you have the parents who feel they need to be on the officials, as well.”

Although he doesn’t always agree with the calls, the coach recognizes the challenges. “I know I could never handle” being a ref, he said.

Abusive taunting of referees happens at schools all over the county. It’s not unique to Beacon or Philipstown. It’s also not new. In 2004 an official posted online that one reason people don’t continue as referees is that “people are not conditioned to being yelled at constantly by so many people, especially when the people doing the yelling don’t have a clue about what they are talking about.”

He added that people often become officials “because they think they can do a better job than what they’ve seen done. Whether that’s true, they often think if they do a better job, people will appreciate it. But they don’t understand that when you are keeping score, at least one side isn’t going to like you.”

“There is a change in fans,” an NFL official who also referees high school games in Florida told the Miami Herald last year. “They are less forgiving of an official’s mistake. There is a lack of respect. And in today’s world, the abuse can be spread very quickly online. I think some young people are looking at that and wondering why they should get into officiating. Some of the veterans wonder why they continue to do it.”

Most don’t do it for the money. According to one survey, per-game pay ranges from $35 to $90, depending on the sport and location.

Most officials say their goal is to provide a safe, neutral environment for the players. Most are former players or coaches themselves. 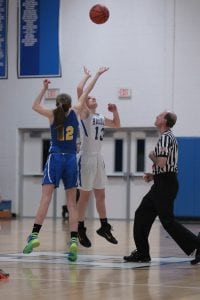 An official starts the Haldane vs. Putnam Valley game on Dec. 18 with a jump ball (Photo by Richard Kuperberg Sr.)

Antonio Brimmer, head of officials for the New York City Public School Athletic League, sees a deconstruction of what he feels was once a more orderly high school fan. “Parents today feel because they sit in the stands for hundreds of games, that they instantly become experts on the rules,” he said. “Sometimes it gets out of hand where a fan is becoming disruptive in the stands and I have to get control of the situation.”

Many schools ask parents to sign sportsmanship “contracts” in which they agree to behave themselves. But athletic directors still must often assign chaperones to manage the crowd. “I have to plan accordingly to have chaperones at all of our games,” said Haldane’s Salumn. “There have been times when fans have been asked to leave. Athletics is an opportunity to see kids succeed and fail, and parents have difficulty seeing their child struggle and their emotions get the better of them.”

Being an official “is not for the thin-skinned,” added the local referee. “You can never take it personal.” But, he said, “you feel the tension. The kids feel it too. They emulate what they hear from the parents and coaches. I have been spoken to in ways I have never been spoken to in the past by kids.”